An all-new company has taken on the historic yet tainted Coys name – but it won’t be able to help the former customers still owed money.

In April 2020, Coys of Kensington Ltd went into administration, owing around £5.8 million. The previous year, one of the two then-directors, Chris Routledge, was led off the Techno-Classica Essen auction podium in handcuffs by German police, accused of fraud.

Many will recall that this wasn’t the first time a company bearing the Coys name had gone into administration leaving significant debts, mostly to customers who hadn’t been paid for sold cars.

Now the Coys name is back as an all-new firm, with no involvement from the previous directors and new investment from a family known for its connection to classic cars. But is it enough? And can the new company overcome the tainted history of the past two decades?

It wasn’t always like this. Much has been made of the long history of the Coys name, which W.E. Coy opened in Kensington’s Queens Gate Mews in London as the first pumped petrol station in London, to dispense petrol and offer services to discerning motorists and important local clients, including the Royal Household.

Mr Coy later picked up a number of franchises as an agent to sell new cars for a variety of manufacturers. In the early post-war period when new car production was slow he concentrated on recommissioning and selling quality pre-war cars such as Rolls-Royce and Bentley, which he did until selling to Charles Howard in the 1970s.

From 1981 Coys was run by Jeffrey Pattinson and Douglas Jamieson. Throughout the 1970s, ’80s and ’90s it was one of the leading classic car dealers and auction houses, working from a mews in Kensington, London. Many of the big names in the industry cut their teeth at Coys.

A new company quickly emerged, called Coys of Kensington Ltd, again with Routledge and Jamieson as directors. The latter left the firm in December 2015, and passed away in 2019 aged 66. When the company went into administration in 2020, the directors were officially listed as Chris Routledge and Ben Manch.

In June 2020 the new business was founded, Coys of London  Automobiles Ltd. Richard Calleri of Geolog was named as director and Luxembourg-based investment firm Karmi Invest as shareholder. Geolog, founded in 1982, specialises in surface logging for the oil and gas industry; Antonio Calleri and son Richard are known classic car collectors, with Antonio a long-time participant in the London to Brighton Veteran Car Run. Richard has appointed Nick Wells, a Coys consultant since 2010, as managing director.

So, the obvious question: why resurrect Coys? “Coys is an iconic, long-standing brand. However, the mismanagement and poor reputation it garnered over recent years represented a clear challenge to any potential new owner,” Dubai-based Richard tells Magneto.

“It won’t be easy. Our intention is to finally manage such an historic and well known classic car brand the way it deserves, and to bring it back to its original success and splendour. The inappropriate activities that were apparently carried out by the former Coys owners shouldn’t have been allowed to take place, and they have unfortunately tarnished not only the Coys name but I also believe in a small way the antique car auction business in general.”

Nick Wells adds: “We want to offer good-quality cars, good service and excellent customer support, and not try to be the biggest auction house. We need to regain our ground in the marketplace.

“When we put the announcement out, we wanted to see what the reaction would be. There’s been a split: a backlash from creditors, which I fully expected, and some confusion, with creditors saying: ‘Well, if Coys is back up and running, can I have my money back?’ They had not understood that it’s a new business, and if the new ownership had taken on the old company’s liabilities then the name would just die.

“But there was also a real outpouring of affection for the brand, from people in the trade, from collectors, from those who remember it in its heyday of the 1980s and ’90s. There will still be people who are quite reticent, suspicious about how the current Coys will be from now on, but that will subside because there won’t be a story.”

Would it have been better to start afresh? Nick says not: “We ultimately decided that we should keep the name and restore it, as opposed to starting what is effectively a worldwide brand from scratch.”

The new company will, as in Coys days of old, split its activities between on-site cars sales from its refurbished base in Richmond, London, and “a handful” of auction sales in the UK and Europe, says Nick. These will include Techno-Classica Essen in April (an online event this year), Chiswick House, London on July 17 and the Royal Horticultural Halls in Westminster, London on December 8.

Anywhere else? Richard says: “Yes, in time. However, we must first rebuild in our home market and win back the trust of British and European customers. It won’t be an easy task, but we enjoy a good challenge.”

Questions have been asked of Nick’s involvement in the new company, as he worked for the previous iteration of Coys. But he says that he wasn’t involved in the day-to-day running and is actually also owed money. He says: “It [Coys of Kensington Ltd] was getting into some trouble, which was worsening in the run-up to the COVID-19 breakout, which led to it going into administration. We were all surprised by the amount owed.

“I think Coys was always handed down from one person to another within the trade. It’s never actually been adopted by a corporate, and properly structured and funded.”

So, it’s clear – and legitimate – that the new firm, Coys of London Automobiles Ltd, has no liability for the money owed to creditors. Administration of Coys of Kensington Ltd is still in progress, but the outlook for the many customers owed money isn’t promising.

Will that affect the future of the new company, Coys of London Automobiles Ltd? Only time will tell. 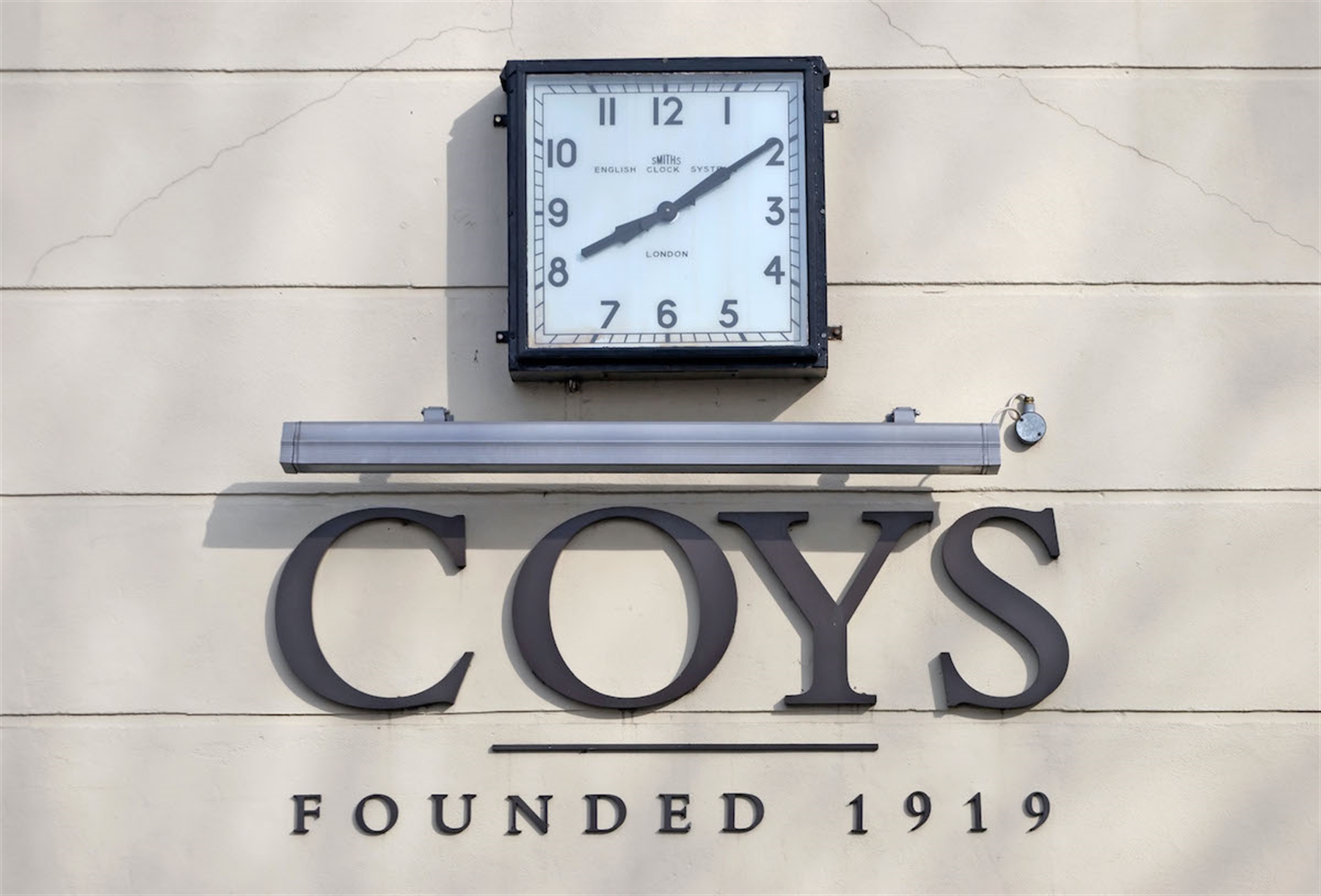