The Goodwood Revival returns to the Duke of Richmond’s legendary circuit in West Sussex on September 17-19, 2021, after 738 days of waiting.

This year will be the 23rd edition of the Revival, which is famous for showcasing the world’s most iconic and valuable historic racing cars in wheel-to-wheel competition, piloted by some of the most famous names in motor sport.

The action gets underway on Friday morning, which sees a raucous armada of classic hot rods take to the circuit for the event’s opening track parade on Goodwood Motor Circuit. The line-up of rods includes some of the renowned American Rolling Bones machines, which first crossed the Atlantic to make their UK debut at Salon Privé earlier in the month.

Once the hot rods have retreated to the pits, crowds will continue to swell trackside as the Sir Stirling Moss Trophy cars make their way onto the circuit for free practice. Formerly known as The Kinrara Trophy, the 30-car grid is nicknamed “the most expensive in the world”, with an estimated value of close to a quarter of a billion dollars in years past. This year, the race card includes seven Ferrari 250s, ten Jaguar E-types and four Aston Martin DB4GTs, joined by AC Cobras and Porsche 356s, among others.

The opening Sir Stirling Moss Trophy practice session will also herald the historic racing debut of Formula 1 World Champion Jenson Button, who will race a 1962 Jaguar E-type on Friday evening alongside teammate Alex Buncombe. Friday’s headline race is complemented by 13 free-practice sessions, with almost every car and driver taking to the track for the first time.

Friday will also hold the first Celebration of British Racing Motors (BRM) track parade, which celebrates 70 years of the iconic British marque with an incredible cavalcade of every Grand Prix-winning BRM. As well as celebrating the past, the parade will also showcase the track debut of the new V16-powered BRM Type-15 Continuation car, ahead of first deliveries later this year.

Saturday begins once again with the hot rod track parade, presaging the first day of a packed weekend of competitive racing, with eight races taking place between 9:45am and 15:50pm. There will also be two qualifying sessions for the GT cars of the iconic RAC TT Celebration and the sports cars of the Freddie March Memorial Trophy.

To bring these past events to life, a parade of more than 150 period military and civilian vehicles will accompany Sunday’s race, with more than 250 front-line workers from the emergency services, military and health services taking part. The parade emphasises the parallel between those who “fought for us so diligently” throughout the pandemic, with those who served in the police, health services, military and fire service, and enabled the Allied victory in WW2.

Saturday morning then continues in a jovial manner at 10:40am with the Settrington Cup for Austin J40 pedal cars. The Settrington Cup is open to children aged four to ten, and requires them to perform a traditional Le Mans start before navigating a tricky chicane and making their way down to the finish line on the pit straight.

The Revival’s initial dose of two-wheeled racing gets underway soon afterwards for the first part of the Barry Sheene Memorial Trophy at 11:00am. Meanwhile, discerning automobilia enthusiasts and collectors will undoubtedly flock to Bonhams’ Automobilia Auction to bid on automotive artefacts, models, artwork and number plates. The Bonhams Auction for cars kicks off two hours later, with the 1956/1980s Jaguar D-type offered by Valentine Lindsay expected to secure the top bid with an estimate of between £900,000-£1.2 million ($1.20m-$1.66m).

As midday approaches on Saturday, so too does one of the most keenly anticipated races of the weekend – the one-off John Whitmore Trophy. Intended to celebrate 60 years of the Mini Cooper, the race begins at 11:50am and promises some of the most exciting battles of the event.

The John Whitmore Trophy provides spectators with the opportunity to witness one of the most talented grids in Revival history go head-to-head, as 30 pugnacious little Minis stage a 45-minute, two-driver contest for the top step of the rostrum. Famous drivers include six-time Olympic champion and former Le Mans driver Sir Chris Hoy, Alex and Martin Brundle, Karun Chandhok, Jochen Mass, and three-time Le Mans winner André Lotterer, among many others.

The Glover Trophy opens the competitive racing for Saturday afternoon in style, with post-war-era Grand Prix cars from the likes of Ferrari, Lola, Cooper, BRM and Lotus. The race harks back to the 1953-1965 era, when non-championship Grands Prix were held at the Goodwood Motor Circuit over the Easter weekend. Mike Hawthorn, Jim Clark, Roy Salvadori and Mr Goodwood himself, Stirling Moss, all took Formula 1 victories at Goodwood in period.

Fearsome 1960s CanAm machines continue the theme of snarling American V8 firepower in the Whitsun Trophy at 17:00pm, and the day is rounded out with the glamour of 1950s sports cars from Jaguar, Ferrari, Maserati and Lotus doing battle in the sunset for the Sussex Trophy.

Sunday is the Revival’s grand finale, headlined by the RAC TT Celebration. The RAC TT is touted as “perhaps the most important race in historic motor sport”, and the centrepiece of the weekend’s action. Crowds will gather trackside for lights out at 14:30pm, signalling fierce racing between a grid filled with elegant and priceless machinery. This year’s RAC TT Celebration race card boasts four Jaguar E-type Semi-Lightweights, one E-type Lightweight, 11 AC Cobras, along with trios of Porsche 904s and Corvette Stingrays. Martin Brundle, Derek Bell, Jenson Button, Andy Priaulx and Jean-Eric Vergne are all amongst the elite roster of confirmed drivers.

The return of the Richmond and Brooklands Trophies are Sunday’s must-see events for fans of vintage Grand Prix cars. These take place after the adrenaline-fuelled final Barry Sheene Memorial Trophy motorcycle race, and the wasp-like field of Formula Junior cars in the Chichester Cup.

Sunday’s mid-morning interlude to competitive racing is particularly special this year, as at 10:50am Sir Chris Hoy leads a cycling parade to mark the return of the Eroica Britannia Festival to the Goodwood Estate from 2022. There is also a track parade dedicated to Sir Stirling Moss at 14.00pm, after the pandemic meant Goodwood was unable to pay tribute to the legendary British driver’s passing last year.

Once the dust has settled, the event concludes with the official prize-giving ceremony at race control at 18:45pm, before gates close at 19:30pm. 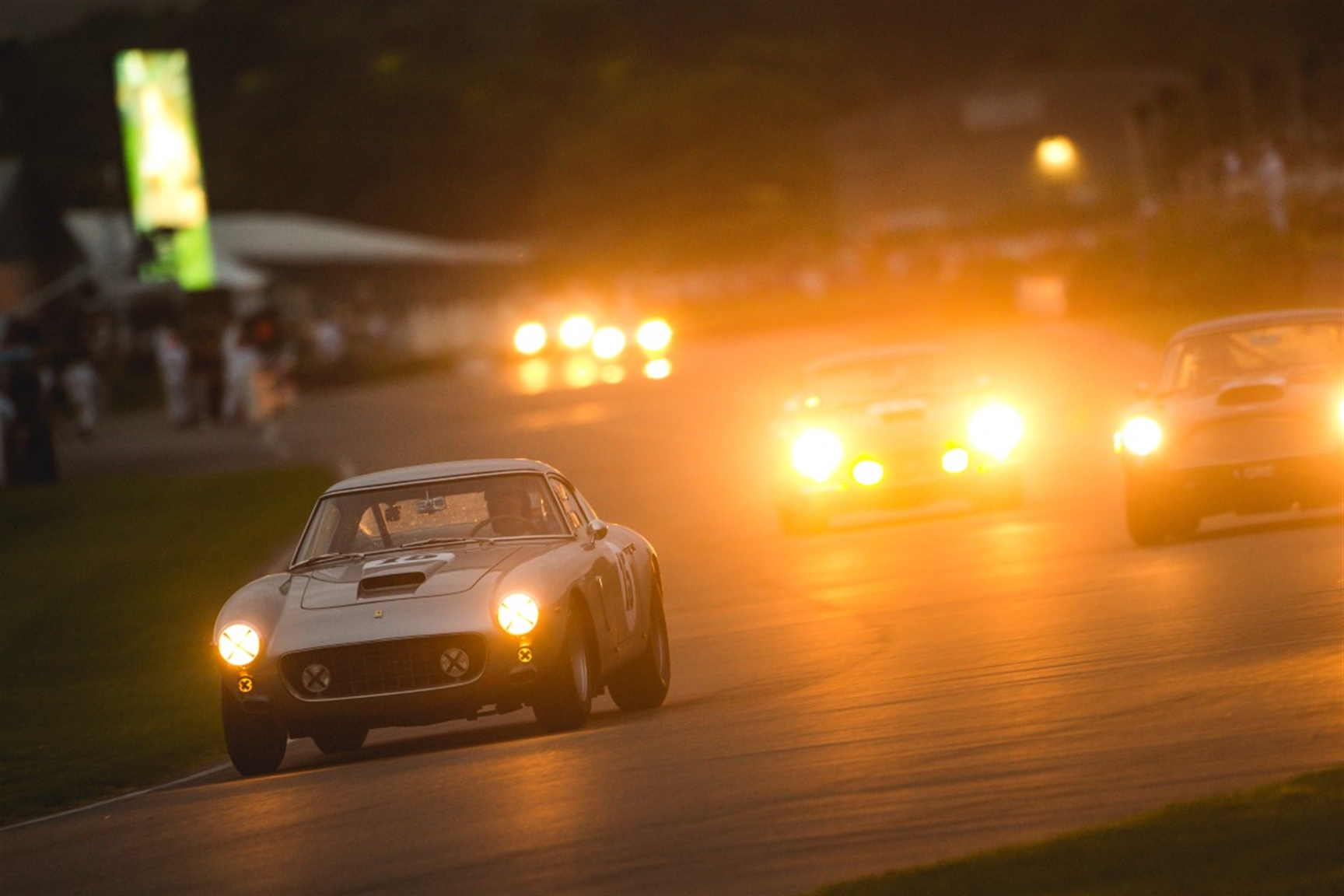 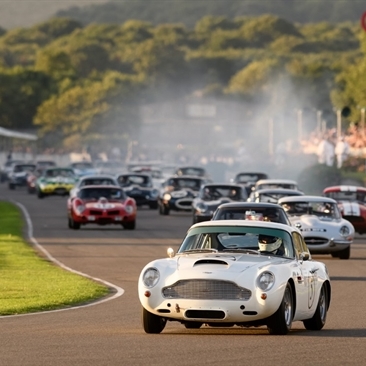 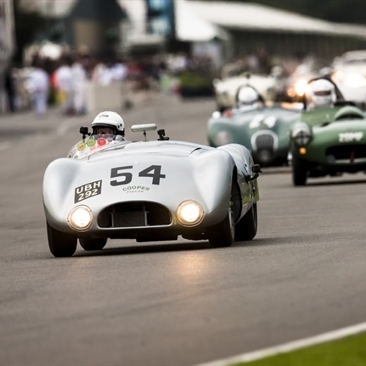 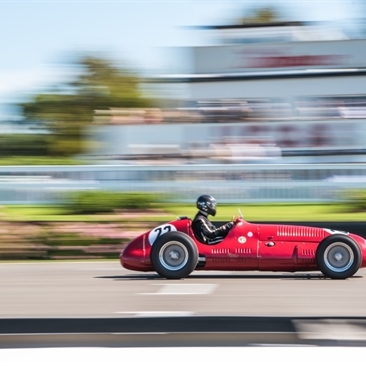 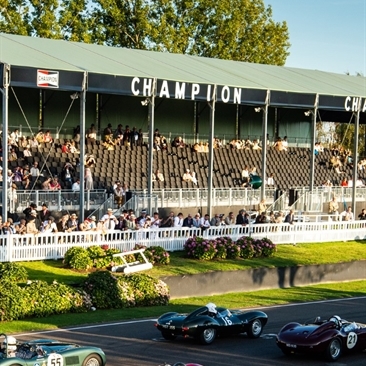 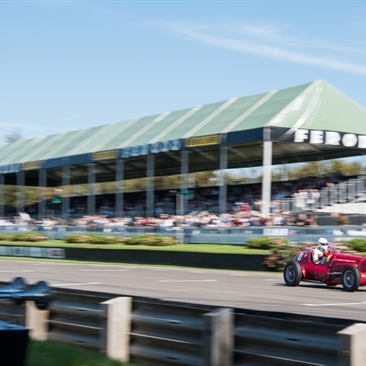 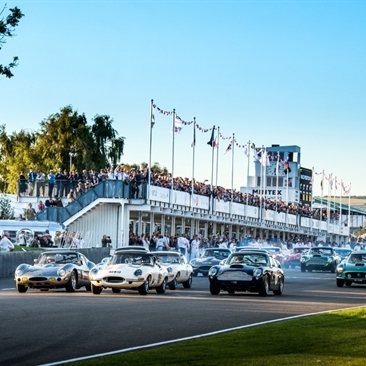 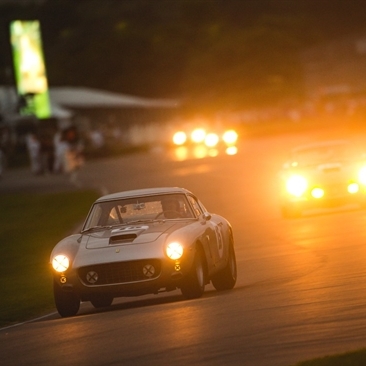 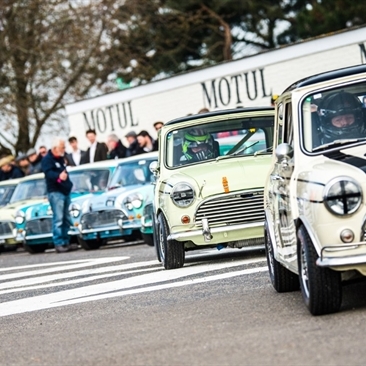