Forty cars hit the road from Venice to Trieste for the second Lamborghini & Design Concorso d’Eleganza. We were there, driving the company’s museum cars and revelling in the sound of V12s.

The day starts in a Jalpa with uncooperative door mirrors and retina-scorching yellow paint. I’m still snicking my way through the unfamiliar open gate of the dogleg gearshift when an Aventador SVJ screams past, making me jump. Up ahead, 350GTs, Miuras, Countachs and Diablos are mixing it with a smattering of Urus SUVs and a gaggle of modern supercars. It’s intoxicating.

This is the second Lamborghini & Design Concorso d’Eleganza. It’s not quite as serene as your typical concours – although, to be fair, it began the previous night in Venice with a boat cruise of the Grand Canal followed by dinner in Palazzo Grassi (turned into its current form in the 1980s under the direction of architect Gae Aulenti, whom the Concorso is honouring). So it’s not all been revving V12s.

Today, though, has started full throttle in a large multi-storey car park just outside Venice, where nearly 40 Lamborghinis have been under high-security guard overnight. When all the owners arrive together by luxury coach and head straight for their cars, the resultant symphony of V12s (and a few V8s and V10s) starting more or less in unison provides the most gloriously ear-battering symphony and a fair whiff of unburnt fuel.

And then we’re off, blasting unhindered onto the bridge out of Venice with the help of support vehicles and motorcycle outriders who continue with us through every stage of the journey to our base for the next two days: Portopiccolo, a discreet luxury resort on the northern-most edge of the beautiful Adriatic.

The Museo Lamborghini’s Jalpa is proving to be a surprising delight. The steering is light and precise, the 3.5-litre transverse V8 a joy to rev and the gearshift easy through that lovely open gate. The roof has been unclipped and stashed easily behind the seat, meaning that headroom isn’t an issue – sitting in the car even for a few minutes with the roof on felt rather more cramped.

The first stop, in the historic Piazza Foro Boario of Vittorio Veneto, is the first real chance to see all the cars together. There’s talk of the oldest Lamborghini in existence being in the group – and sure enough there’s the 1964 350GT chassis 102, the second car built (the first one having been lost in period).

It’s time for me to say goodbye to the Jalpa, which I feel surprisingly sad about. Its replacement is the silver 25th Anniversary Countach: mean, formidable and a little cramped. The bulky electric seats of the 25th Anniversary model are more a hindrance than a help, and to get sufficient legroom and headroom means leaving my lower back completely unsupported. It hurts through town, especially with that heavy clutch action and shoulder-wrenching steering and gearchange, but as we hit open roads all is forgiven. This car is a monster!

The 5.2-litre four-valve-per-cylinder V12 is all torque, and the car feels completely planted in every manoeuvre. The steering weights up in tight turns, but as soon as the speed is up it becomes responsive almost to the point of twitchiness. As the owner of a remarkable 4000-mile 25th Anniversary Countach comments as he pulls alongside at lunch, it’s a misunderstood but fantastic car that needs time to learn before the rewards can be taken. Above all else, it feels special, and to crawl along with a scissor door open makes you feel like the coolest man in town. The onlookers don’t need to know the truth (or that the electric windows open only a few centimetres). Or, for ultimate supercar cool, learn to reverse with door up while seated on the sill.

Another stop, at the stunning Castello d’Aviano, and another swap, this time into the Jarama. This one’s fresh out of a ten-year slumber at Museo Lamborghini, and resplendent in Blu Tahiti, one of the great Countach colours. Its looks are divisive, but I take an immediate liking to its feeling of airiness and uncluttered views past the thin screen pillars; a huge contrast to the Countach.

The steering and brakes are equally contrasting… the former feels predictably undergeared after the kart-like Countach, with too much slack around the straight-ahead position, while the latter are wooden and lacking bite. But it’s a characterful machine, especially once the over-long accelerator pedal action is discovered – press, keep pressing, press some more and finally the downdraught Webers open fully and the 3.9-litre front-mounted V12 comes alive. Wonderful.

And one last swap, this time into a new Aventador SVJ, Lamborghini’s most hardcore supercar. After the soft Jarama, and the long day driving, it’s a shock to find thinly padded carbonfibre seats, a view of nothing but louvres and spoiler in the rearview mirror, and a tooth-rattling ride. Passenger Patrick, allegedly in the spirit of journalistic investigation, switches the drive mode from Strada to Sport to Corsa – and swiftly switches it straight back as the suspension goes from hard to rock hard and the exhaust from blare to deafening. On another day, on another road – or better still a track – this car would be utterly phenomenal. As it is, the final straw is making a hash of parallel parking it in a dark underground car park when we arrive battered into submission in Portopiccolo. First World problems, eh…

And then we’re led blinking into the sun to take in one of the most magnificent views you’ll find on a European coastline. The late afternoon sun is sparkling on the wave-tops of the Adriatic and illuminating the castle high on the cliff-top, pristine yachts are bobbing in the harbour, and Lamborghinis are filing in to take their predesignated places on either side of the neat harbour.

To one side are the Miuras, and they include the P400 recently verified as the car from the opening scenes of The Italian Job, the SV restored last year by Polo Storico for Jean Todt, and the unusual Azzurro Mexico (light blue) SV once owned by singer Little Tony.

A Miura always looks smaller and even more beautiful in the metal than it does in pictures, but when two hulking black LM002s are parked alongside… well, the difference is extreme, shall we say.

A walk round to the other side reveals, for me, the car of the show: in blue, with all original decals present and correct, is a Walter Wolf-edition Countach, built on an LP400 for the owner of the Wolf F1 Racing Team, with 5-litre engine and the wide ’arches and front and rear spoilers of the LP400S. Even in Countach terms it’s special, and it draws eyes away from the 25th Anniversary cars, the 5000S and the magnificently macho 5000QV.

Before that, there’s dinner in the 14th century Castello di Duino, the cliff-top castle that overlooks Portopiccolo, with another nod to the heritage of Gae Aulenti. Tough life, on these Lamborghini events.

The concours itself, on the Saturday morning, sees the judges inspecting the cars mostly on condition and originality. For all the talk the previous night of Lamborghinis being for driving, not for show, there’s some serious polishing gone on early this morning. But it’s a relaxed affair and a good chance to get to know the owners: one is already planning his next Polo Storico restoration, having only just taken delivery of the most recent one; another owns his perfect Miura, an original Fiat 500 and a modern camper van. Nothing else.

One enthusiast has been so thoroughly inducted into the Lamborghini fold that he’s planning on selling all his Ferraris. There’s a strong feeling that Lamborghini ownership is something above all else, and it’s a family affair, with some entrants bringing along sons and daughters as their co-drivers, and one lucky teenager already in possession of his own modern Lamborghini, although not yet in possession of a driving licence. Oh, and not forgetting the wonderful lady whose little dog goes everywhere with her in her Urraco. This is a friendly, deeply passionate crowd.

Who wins the concours? All will be revealed later. First we’re off again, underlining the importance of the drive, not the show, to Lamborghini owners. We convoy 16 miles down the road to Trieste, where we arrive to a superstar welcome into the Piazza Unità d’Italia for lunch at Harry’s Bistrò, and then head off through an ever-growing crowd of Lamborghini admirers onto the route of the Trieste-Opicina hillclimb.

This is exciting stuff! The hillclimb was first run in 1907, one of the very first motor-racing events in the region, and it continued – sporadically at first – right through until 1971, attracting ever more powerful cars and ever more famous drivers. And that, of course, was its downfall, so that by the 1970 event a Ferrari 512 S was recorded as covering the steep, ever-twisting 8km closed-road course in 3 minutes 25 seconds, averaging over 93mph. After a hairy, rain-soaked event the following year, the event was declared too dangerous.

I’m delighted to be back in the Jarama, which roars ably up the historic course to Opicina on the Slovenian border, although its brakes begin to struggle on the faster but still twisty route back down the lush foothills of the Slovenian Littoral region towards Portopiccolo. The supercars ahead are soon out of sight but who cares? This drive will go down as an all-time great for me.

That afternoon, the atmosphere couldn’t be more relaxed as everyone sits around the harbour at the open-air bars and cafés. There’s one last treat in store, though, as Bellini Nautica offers a ride in Ferruccio Lamborghini’s personal twin Espada V12-powered 1968 Riva Aquarama speedboat. In 48 hours I’ve heard V12s echoing around a car park, screaming on autostradas, roaring through tunnels and burbling through quiet villages. Now I get to hear two in harmony as we bounce over the waves of the Gulf of Trieste.

That evening come al fresco presentations by the light of Gae Aulenti’s iconic Pipistrello lamps, with talks from Aulenti’s granddaughter as well as Stephen Bayley and Lamborghini CEO Stefano Domenicali – and, of course, the awards. Best of Show rightly goes to the number two 350GT, with honours also going to (among others) the Walter Wolf Countach and the white ex-Rod Stewart Miura S. By the end of it all, I appreciate a little more how it feels to be inducted into the cult of Lamborghini. 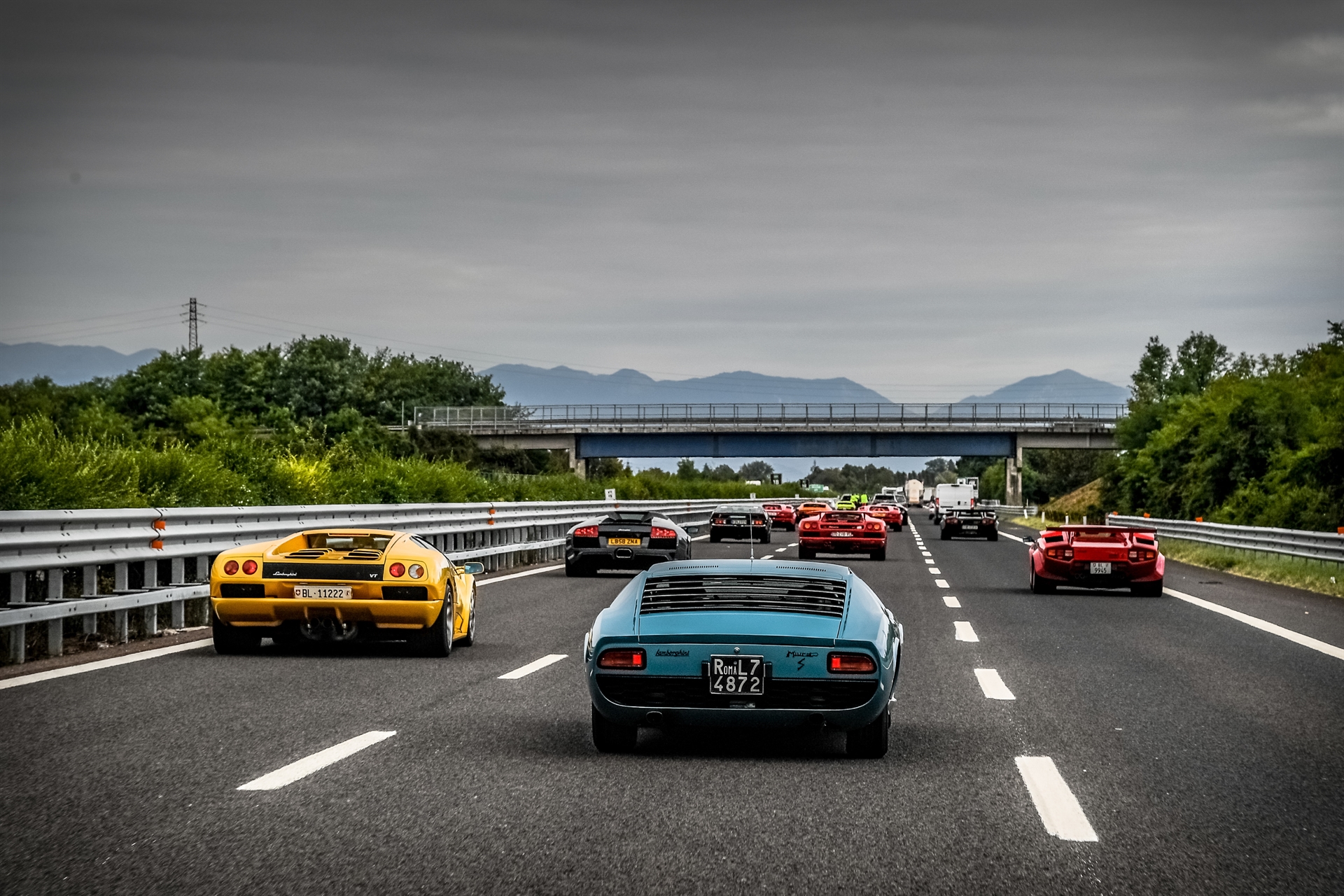 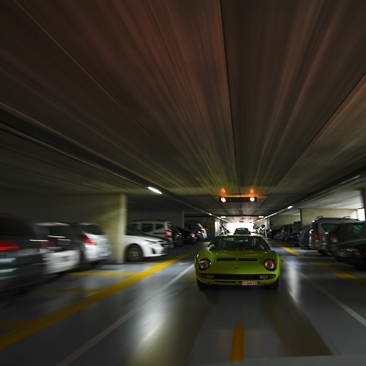 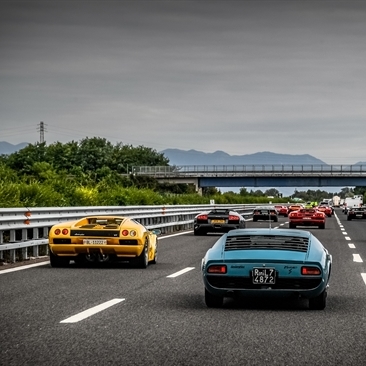 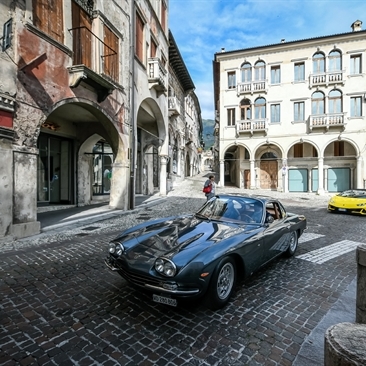 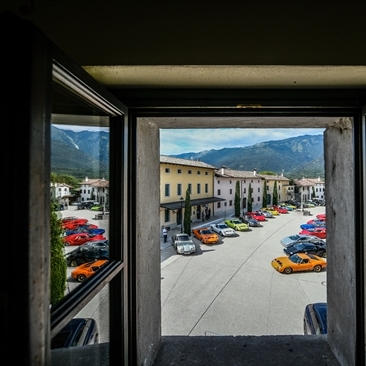 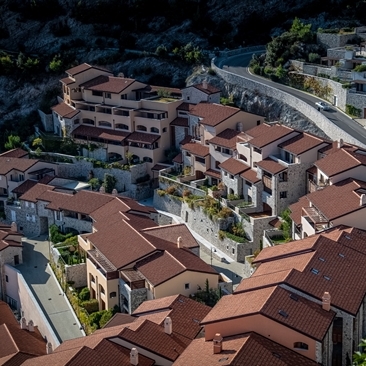 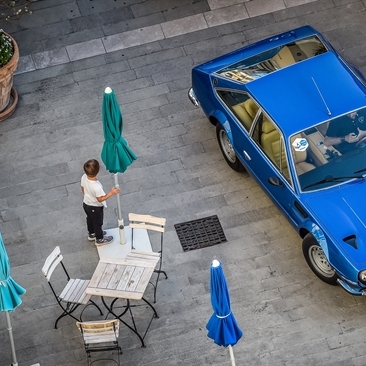 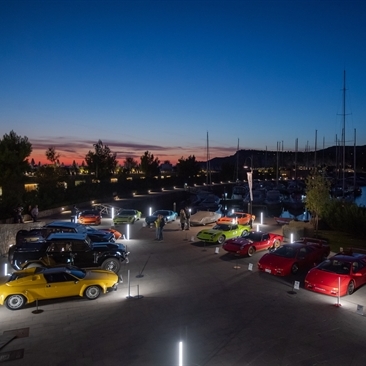 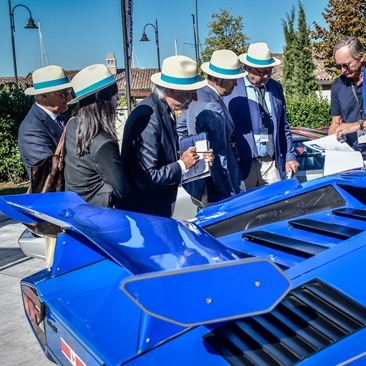 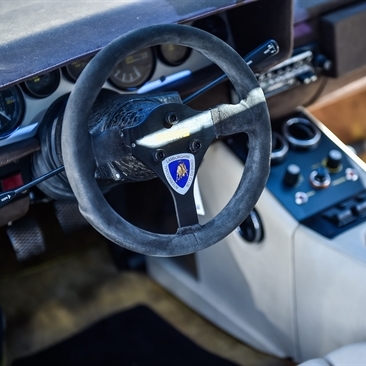 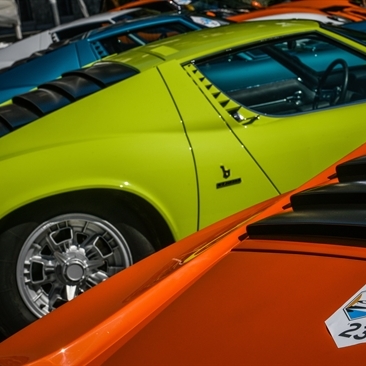 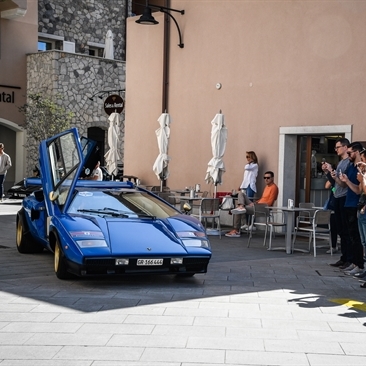 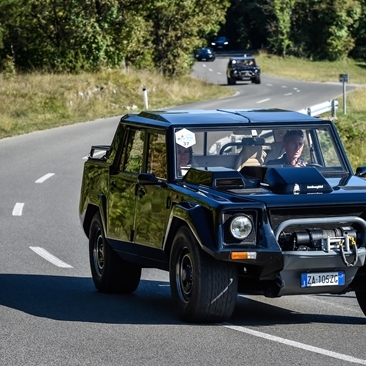 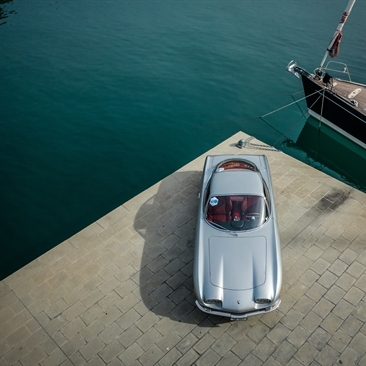 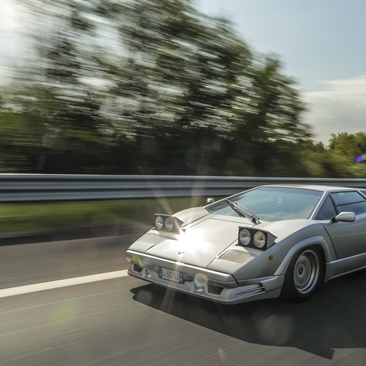 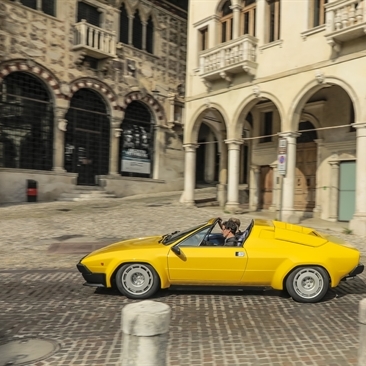