Continuation cars have become big business. Jaguar has recently announced the C-type to follow Lightweight E-type, XKSS and D-type continuations, Aston Martin is currently building DB5 Goldfinger continuations, Bentley has just completed the prototype of its Blower continuation, and others are getting in on the act – Bizzarrini, BRM and Vanwall for example. And let’s not forget that Shelby has been producing continuations for years, as have Lister and others on a smaller scale.

Not everyone is keen, but all examples have sold out – and each one we’ve experienced (most recently the Bentley) has driven just like the originals.

So, here’s what you think, following our request for your views last month:

Safety in Historic racing is the priority

Firstly, let’s all remember that there is nothing new in the world of motor sport and quarrels about originality… It’s called the Frazer Nash Le Mans Replica because… it was a replica.

Jaguar couldn’t sell, by 1958, the remaining D-type chassis, so several became ‘roadified’ as XKSS… And then in the 1960s-onwards, some reverted to being D-types.

In the 1970s, the Cameron Miller Maserati 250Fs began to appear, and for many owners of ‘genuine’ cars, that allowed them to keep racing into the 1990s heyday of the HGPCA series, while the precious originals were kept safe in museums – sensible for the owners, even if Jenks disapproved so strongly.

Fast-forward to 2004, and as we started Masters Historic Racing, my old employers at Lola built a small run of continuation T70 MkIIIBs; lovely cars, to the proper drawings – and at Lola. Should we let them run in World Sportscar Masters, the pre-1974 Le Mans-type cars series? (Nowadays an official FIA Historic championship.) Yes.

Why? Because the cars were always entered in our races as Lola (C) to show ‘continuation’. And if you look at subsequent sales of such cars – there’s one out there at present on sale – there is no doubt what it is: a continuation car.

You ask, does modern metallurgy beat ‘period’ construction metals? Well yes, probably, but as every car in, for example, FIA Masters F1 has to be crack tested, fitted with modern bag tanks and run grippier tyres than in period, that means, yes please, let’s keep the drivers as safe as possible.

I well remember in about 2005/06, watching one enthusiastic wealthy gent putting his lady friend in a “very original Tyrrell DFV” on a test day at Spa, and everyone looking alarmed when she bottomed out at Eau Rouge – literally, the front suspension on both sides collapsed under compression.

In the end, while collectors can decide what they want to buy, and safely ignore the views of the strict purists, I do believe that what happens on the roads, the concours showgrounds and the auction runways is one thing – buy what you can afford and enjoy it, and don’t pretend it is what it is palpably not.

But if an ‘Historic race car’ is to be raced, then what matters most is its safety for the driver and his team, and importantly, the safety of the marshals and spectators supporting the event. When ‘original’ is truly original on the race track, my only question is always – is it safe?

As we have sadly and tragically seen in Historic competition in the recent past, there have been occasions when a desire for originality has actually meant unsurvive-ability.

And if we want Historic racing to continue, that is one very strong reason why we should accept ‘continuation’ cars, correctly labelled, into current-era competition.

This is based on my personal experience and views, rather than being Motorsport UK policy – as a volunteer committee chair, I don’t speak formally on their behalf.

Most people will quite rightly say that continuation cars and, in turn, replicas, allow a wider audience to enjoy iconic cars. Clearly this is a great prospect.

However, there’s another aspect, rarely appreciated, which is with a continuation there is some scope to develop the car into something that might have been, had the opportunity been there in period. You can’t really do this with a two million quid, original time-warp car.

Take my own car, a 1993 AC (Autokraft) MkIV. We’ve painstakingly modified it to accept a 427 big-block, to original internal specifications, but crucially with a newly available, all-aluminium block. A more difficult project than you might think, as the MkIV engine bay will only accommodate the small-block 302.

Why bother? Well, most aficionados will know that Shelby realised on page one that the front-heavy, terminally understeering 427 Cobra desperately needed an aluminium block. But that wasn’t a reality back in the 1960s, so the 427 stumbled and never experienced its finest hour. But today that’s a possibility, and if owners have the commitment, they can add their own contribution to the car’s development.

I wish Shelby and Ken Miles could try this sweetly balanced, neutral-handling machine. I totally adore it, despite the 16-month transformation timescale.

The more iconic cars, the better

I want to point out that Historic racing is itself an artificial construct. It cannot reproduce the close competitive racing of the past, when all the cars racing were in the same generation of racers. It doesn’t seem competitive to put all these old cars on a track for the purpose of real racing. Instead, it is a thrill for us old-timers to see and hear again the cars we once rooted for. But we can do that just as well with continuation cars as with bona fide originals.

The main controversy is more likely that the owners of the real old cars see the continuation cars as devaluing their cars. My answer is “tough”. If there were only a few of a really awesome model made, then it seems wonderful, not terrible, that some guys will now have the option of enjoying the experience of owning one.

That’s why the continuation Cobras are great in my judgment. More guys have more fun. That’s what the car enthusiast scene is all about – more guys having more fun. To denigrate this principle because a few rich collectors might see a possible value drop in their precious rare vehicles is elitist.

We don’t need a few rich guys owning all the fun cars. We need more of the best designs out there pleasing more people. We need more XKE Series 1s, more Miuras, more Mistrals, more Bizzarrinis. More Alfa GTZs. More Porsche 904s. Bring them on. Away with the rich guys that squirrel these things away in private warehouses, and bring them out just in order to feel superior to the rest of us every year at Goodwood.

Having read several articles about continuation cars, [I think] in itself it’s a good thing and allows people to purchase their choice of marque. Having restored several cars and motorcycles, it is also important that spares are remanufactured so they allow restorations of original vehicles.

No difference between Chevrons

The continuation argument goes on; I tried for years to get a decent Chevron B8 but they all seemed a little overpriced. Then along came the chance to buy a continuation model, and they really are quite stunning.

Last year I took it to Silverstone on a lapping day, and with the help of Nigel Greensall and Richard Walbyoff of RW Racing we got it well sorted. They both were of the opinion that there was no difference from the old to the new. I hope to race it at the Daytona Classic later in the year, as it has been cleared by the officials.

Whilst I support the engineering endeavours/standards used in continuation models and the production of obsolete parts, I hope that they are never allowed to race against their predecessors.

There is no doubt about it; as the article says, new metal is intrinsically stronger, better manufactured and of a much higher standard. Many aspects of engineering have moved on, let alone the big boggie of fatigue entering the equation. The latter is an insidious ‘creeper’, and one does not know when and where it is going to strike next. Driving a continuation car, one does not have to worry about such things.

It is like being in a flight simulator; no matter what one does, you will not get hurt if you crash it. However, no matter how one tries driving an original, there is always the niggling doubt ‘it could happen’, despite one’s best efforts to ignore it.

I have been following your debate about continuation cars with great interest. There is another important point that has been overlooked – that of the spectacle for the hordes of passionate folk who regularly pay to watch Historic motor sport.

We would all unquestionably love to see a grid of ex-Fangio’s this and ex-Clark’s that, but cars with real history have become the preserve of the super-wealthy. And whilst a current owner may have the passion and budget to want to keep their piece of history on the race tracks, as these cars continue to soar in value then future owners are more likely to view the car as an ‘asset’ or even a work of art than to ever dream of risking it on the circuit.

Embracing continuation cars is the only realistic way to ensure that the public will continue to see, for example, C- and D-type Jaguars racing in the manner in which they were intended, and that the Historic scene remains as vibrant and successful as it is. 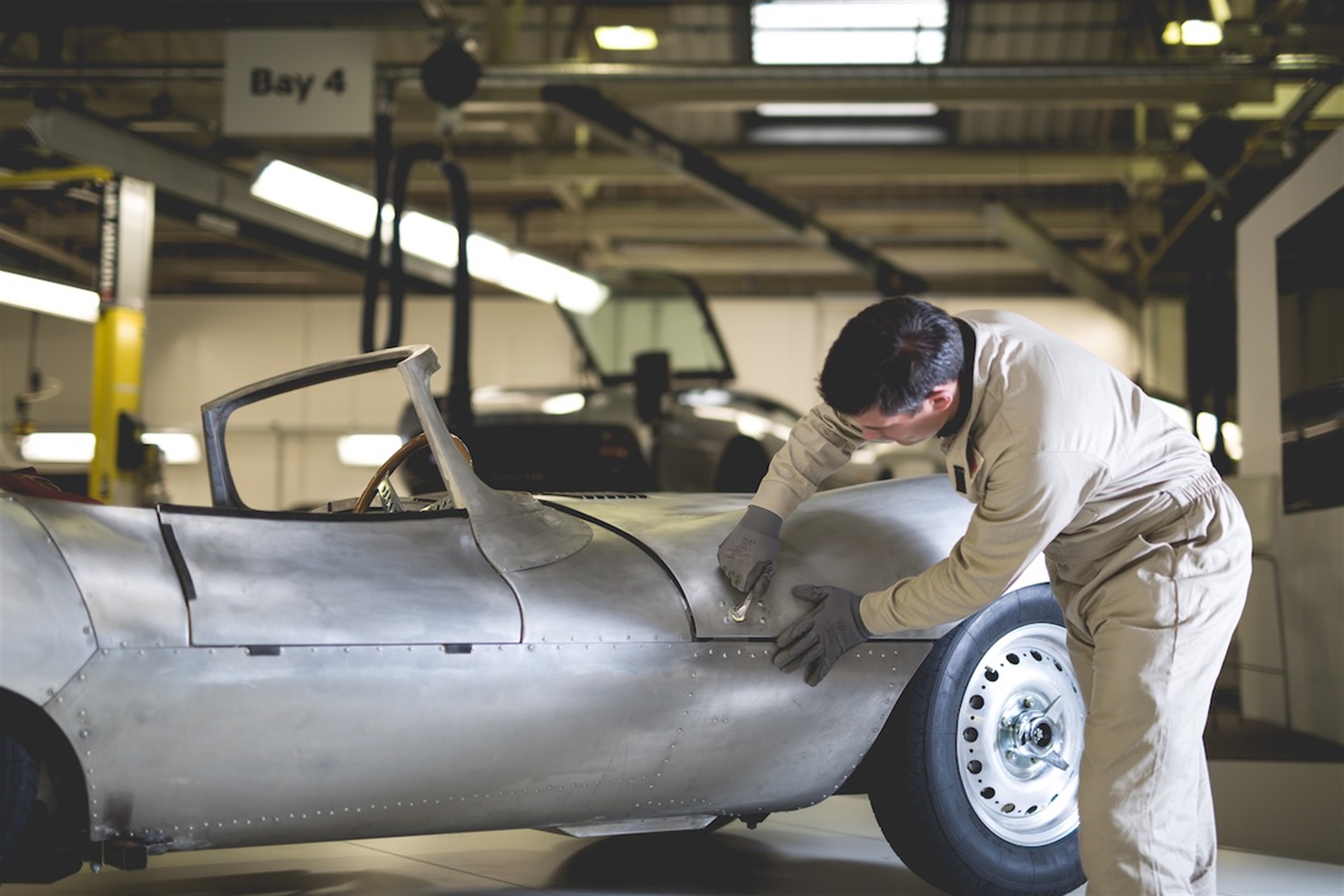