There’s nothing quite like a Zagato car. Close your eyes, and you may recognise engine-sound timbres from what lies beneath, but the surface impact will invariably make you stop and think, even if you don’t always fall in love. There’s no mistaking a Zagato.

That comes to mind with the dark-blue shape slinking out of Zagato’s Rho HQ, just north of Milan and stone’s throw from the site of Alfa Romeo’s former factory, Arese. This is no Alfa, however – the beating heart of this monster was formed around 100 miles away, down the A1/E35 autostrada in Modena.

The Zagato Mostro Barchetta by Maserati is one of only five cars built, and all have been sold. It’s the roofless version of the gullwing coupé first revealed at the Villa d’Este Concours d’Elegance in 2015 to celebrate Maserati’s 100th anniversary. Seven years later, and three years since the coupé versions were announced, the Barchetta version broke cover at the 2022 Villa d’Este.

The Barchetta may do without the roof and gullwing doors of its coupé sister, but there’s no doubting the impact of the design from Zagato’s Norihiko Harada. While this car, as with the coupé, was influenced by the famed Maserati 450S Costin-Zagato that was dubbed ‘The Monster’ by Stirling Moss, it still looks like something beamed in from another universe. As it should – after all, it’s a Zagato.

That uniqueness is what attracted Norihiko to Zagato in the first place. “Beauty and technology interact directly and spontaneously,” he says of the carrozzeria’s ethos. “Zagato designs are always very sporty, and have their own identity – evergreen and pure.”

His first exposure to the company’s work came at an early age, while he was still in Japan. “I was a 12-year-old elementary-school student; I saw an advertisement for the Alitalia airline in one of my father’s magazines,” he explains. “In the photo there was an Alfa Romeo Junior Z parked right underneath the wing of a Douglas DC-8, close to the big turbofan engine. I fell in love with the car right away – the Plexiglas-covered headlights on the sleek nose looked so impressive, with such a mean and proud look.”

Norihiko has been with Zagato since the mid-1990s, and has seen the twists and turns in the company’s fortunes. He defines the brand’s style as representing the spirit of the automobile itself, pushing the car forwards: “Zagato’s style is the best way to understand how automotive beauty has been created between designers and engineers throughout history, particularly between the 1920s and 1960s.”

The 1950s were a strong period for Maserati, although the current Mostro’s inspiration has a part in the Modenese firm’s demise in sports car racing in 1957. Chassis 3501/4501 had begun life as a 350S, but was upgraded with a 450S engine. Stirling Moss and Juan Manuel Fangio drove the car in 1957, starting the year with retirement at the Buenos Aires Grand Prix before bouncing back with victory at Sebring. For Le Mans, however, it wore very different clothes.

Moss suggested that Frank Costin apply his aerodynamic nous to the car to make it much more slippery along the long La Sarthe straight. Costin styled a low-drag body that Zagato built in only a few days. It was upon seeing the creation that Moss conceived that Monster moniker.

Le Mans wasn’t a success – Moss and Fangio did their best with the car, but it was prone to overheating and was actually slower than the 450S roadsters. Despite these challenges, it ran as high as second before transaxle failure ended its race prematurely.

After the event the body was removed from the chassis, and there it sat for the rest of the season. At the end of the year Maserati pulled out of sports car racing, and started selling off all its motor sport assets. A chap called Byron Staver stepped in to save the body, and asked Maserati to build a new car based around engine no. 4512, which is the chassis number now most associated with the vehicle. Maserati drafted in Fantuzzi for alterations, which included lengthening the car by 25cm and fitting an interior, front grille and new wraparound windscreen for use on the road.

Fast forward to 2015 and today, and the modern interpretation uses a similar racing-car chassis. Underneath Norihiko’s design lies the lightweight chassis of a Gillet Vertigo .5. Gillet has been around since the early 1990s, building a lightweight chassis made from carbonfibre and Formula 1-inspired honeycomb materials. While early examples used a four-cylinder turbocharged engine gleaned from a Ford Sierra Cosworth, for much of this car’s life it used heavily tuned versions of the Alfa Romeo Busso V6, and competed in the Belgian and FIA GT Championships in the G2 class for non-homologated machines.

In 2008, motive power switched to the Ferrari F136 engine, as used in crossplane-crankshaft form by the Maserati Coupé, GranSport, Quattroporte and GranTurismo; it is this combination that forms the basis of the Mostro and Mostro Barchetta.

Zagato says the 4.2-litre V8 produces 420bhp, which is marshalled by a manual sequential six-speed gearbox. The car features double-wishbone suspension front and rear, with pushrod-actuated springs and dampers, and AP Racing calipers provide the stopping power. Useful to know, that – there’s no electronic traction control and the model weighs just 1200kg thanks to a carbonfibre chassis with a steel rear subframe.

Inside, there’s sumptuous leather and Alcantara, but there’s no getting away from this car’s racing roots; the dashboard is free from superfluous screens and buttons. It’s all focused on the drive, and the baritone growl that evolves to a cat-like howl as the revs sweep further around the dial. It certainly draws attention, although even if this car was EV propelled it would garner the same response. During our shoot in the towns above Bellagio, what were quiet side streets turn into carnival-like crowds, here to see the caged monster like some kind of old circus act.

The thing is, however, with its low stance, sensuous curves and dramatic slash from the front wings backwards, all rounded off with voluptuous hips, the Mostro doesn’t seem monstrous at all. It’s far too pretty for that.

Norihiko is pleased with how the Barchetta has turned out, and highlights the continuity between the door panel and the door glass as his personal highlight. “It continues without any surface break or bend,” he says. “I could realise this because the side glass is fixed and does not drop into the door – it helps to keep the design essentially pure.”

This purity extends to the way Norihiko approached the design, which was inspired by the 450S and other 1950s racing cars: “If people appreciate the pureness and simplicity of line with the Mostro, it’s because I did not look at too many things to get inspiration.”

Instead, he draws his design influence from other forms of getting about in a hurried manner. “I’ve always loved aircraft and ships, any kind of invention built to move fast,” he explains. “I love to see or stay close to flowing rivers.”

That organic influence is reflected in the way Norihiko approaches a fresh design. “I start by sketching manually on paper, with a BIC ballpoint pen,” he explains. “Once I find some nice feeling, with a spontaneous mess of lines, I try to fit to the package or technical restrictions. Then I start to ‘cook’ them on a computer with Alias software – we don’t normally make a physical model.”

This fluidity in the design process is a reason to be positive about the incoming rush of EV powertrains, according to Norihiko. “I’m positive to any kind of opportunity that can give us wider space to explore our creative spirit, as well as evolve the automobile between new technology and design creativity,” he says.

The move to EV propulsion upsets many in the collector car scene, but even if the propulsion doesn’t quite spark joy, then the design opportunities such drivetrains offer should serve up some fascinating shapes. Norihiko’s positivity towards the future should keep Zagato doing what it does best – provoking, intriguing and delighting its ardent fans.

The Mostro Barchetta is more reverential of the past than suggestive of an EV future, but it is all the more glorious for that. As its slinky form slips out of sight, its howling V8 reverberating around Bellagio, the Mostro has created an indelible impact – just like every Zagato should.

Thanks to all at Zagato. More details here. 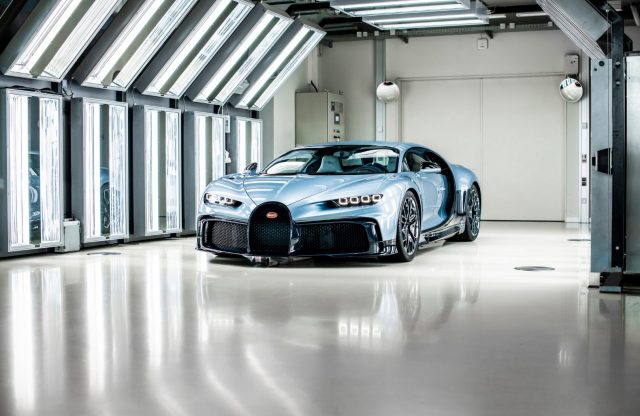 Molsheim has entrusted RM Sotheby’s with the sale of its one-of-a-kind Bugatti Chiron Profilée on February 1, 2023.