One of the greatest ever racing drivers, Sir Stirling Moss, has died. Here are just a few highlights from his remarkable life

Stirling Moss passed away in the early hours of Easter Sunday, aged 90, surrounded by his family. He was one of the true greats of motor sport and undoubtedly the greatest racing driver of his era.

His career had effectively ended after crashing at the 1962 Goodwood Easter weekend meeting but he remained a fixture of the scene, and in more recent years enjoyed historic racing and rallying, cementing his place as Britain’s best-loved racing driver.

Stirling’s mother and father had both competed in motor sport, and his father’s Frazer Nash-BMW 328 provided the young Stirling with his first taste of competitive driving. However, it was in a Cooper 500 in 1948 that Stirling’s career really began, attracting the attention of works teams – and propelling him into Formula 1. He’d had to persuade his father that he wanted to be a racing driver rather than a dentist – and use his winnings from horse-riding competitions to pay the deposit.

Stirling’s first major win wasn’t in single-seaters however but in sports car racing, driving a borrowed XK120 in the 1950 RAC Tourist Trophy at Dundrod. Even in those early days he was successful in rally driving, too, particularly in the Alpine Rally and in the 1952 Monte Carlo, in which he finished second driving a Sunbeam Talbot 90.

Mercedes race manager Alfred Neubauer suggested that Stirling should buy a Maserati 250F for the 1954 season to show what he could do, and his successes led to Stirling joining the revered Mercedes-Benz team. It was in the works W196 that he famously won the 1955 British Grand Prix at Aintree, ahead of fellow Mercedes greats Fangio, Kling and Taruffi.

It was also with Mercedes-Benz that he achieved what is often said to be the greatest single day’s drive in motor racing history, in the 300 SLR – race number ‘722’ – in which Stirling won the 1955 Mille Miglia, with co-driver Denis Jenkinson.

While his career in F1 progressed, Stirling still took time out for other ventures, including a few Land Speed Record-breaking attempts. The best was in the streamlined MG EX181 in 1957, which broke five Class F records, achieving 245.64 mph at Bonneville.

Stirling never shied away from innovation, which was never more obvious than when he drove the rear-engined Cooper-Climax in a grid dominated by front-engined F1 cars. He was rewarded with a win in the first race of the 1958 season. Or, when he drove the first single-seater in Europe to be sponsored by a non-racing brand – the Maserati Tipo 420/M/58 “Eldorado’, sponsored by the Eldorado Ice Cream Company.

It was the 1958 world championship even more than any other that should really have had Stirling’s name on it for the world championship but he suffered five retirements through reliability problems, and Mike Hawthorn beat him by just one point. Towards the back end of that season, at the the Portuguese Grand Prix, Stirling had petitioned successfully against the threat of Hawthorn’s disqualification, after Hawthorn was accused of reversing on the track. Had he not done that, Stirling would have beaten Hawthorn to the World Championship.

News of Stirling’s awful, career-ending crash in the Lotus 18/21 at the 1962 Goodwood Easter weekend race meeting interrupted TV broadcasts – unheard of at the time – and crowds of well-wishers waited for news outside the hospital as he lay in a coma for a month.

A year later he tested a Lotus at Goodwood but, though he put in competitive lap times he decided he’d lost his edge, and announced his retirement – probably prematurely. Years later he tried Touring Cars with Audi but racing had changed, as had grip and handling, and he never looked at ease.

Instead, the inaugural 1988 Classic Marathon historic rally saw Stirling enter the world of historic motor sport, which he indulged in enthusiastically. He drove many cars at this time, including his own OSCA and Porsche RS61. It was following the 2011 Le Mans Classic in the Porsche that he decided to retire from historics.

Stirling continued to appear at events until he was taken ill with a chest infection in late 2016 while on holiday in Singapore with wife Susie. After more than four months in hospital there he was flown home, to be cared for in his famous gadget-laden house in Mayfair, London (also scene of an accident in 2010 in which he survived falling three stories down a lift shaft).

When he passed away, Susie, who has cared for him at home for more than three years, said “It was one lap too many, he just closed his eyes.” We’ll remember him as that tough, dedicated, funny, friendly and often politically-incorrect man who would talk about crumpet’ as often as the cars, but who was dedicated to Susie and to the world of motor racing that he did so much to promote.

There will be a full obituary and feature on the amazing life of Sir Stirling Moss in issue 6 of Magneto, out May 5. Subscriptions available here 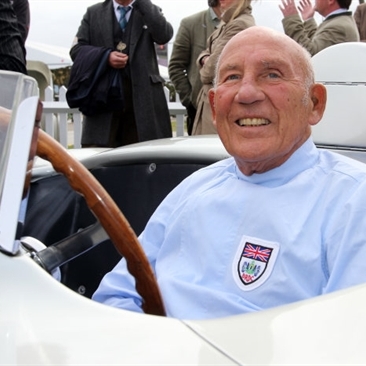