At 35 years old Sam Schmidt was rendered quadriplegic, after suffering a devastating 210mph IndyCar crash at the Walt Disney World Speedway in Orlando on January 6, 2000. In the aftermath of the accident, the doctors told Sam’s wife to find him a nursing home; he would likely not make 40 and would be on a ventilator for the rest of his life.

Twenty-one years after that tragic day, Schmidt is sitting next to a Corvette C8 under a paddock marquee at the Goodwood Festival of Speed. He is about to drive up the estate’s famous Hill. Flat out.

Throngs of people crowd around Arrow’s marquee, trying to get a glimpse of Sam and his cutting-edge C8. “The car is more of a star than I am,” Sam says humbly. Minutes later, the Duke of Richmond enthusiastically greets him and studies his Corvette; the smartphone-wielding crowd encircling him continues to grow. Sam is certainly modest.

His journey to this point is both tempestuous and inspiring. Just two weeks after his accident, Sam had valiantly fought his way off reliance on a ventilator. Fourteen months after that, he founded Conquer Paralysis Now, a foundation dedicated to curing paralysis and supporting those afflicted by it.

In 2001, Sam co-founded the Schmidt Peterson Motorsports IndyCar team, now known as Arrow McLaren SP, and with whom he travels 140 days per year. It’s clear that he has done more in the past two decades than most of us will achieve in a lifetime.

Arrow Electronics is more than a mere title sponsor for Sam’s team. The American Fortune 500 company is closely affiliated with Schmidt and has been instrumental in developing a car that he can drive with only the movement of his head. Sam wears special sunglasses that are tracked by infrared cameras to steer the car; as his head turns, so too does the steering wheel, as if by telepathy.

Then there’s the tricky business of the accelerator and brake pedal to deal with. To get around this, Arrow developed a straw that allows Sam to control the throttle and brake with his mouth: “It’s blow to go, and suck to stop,” he says with a chuckle.

“The journey started seven years ago. We drove the Stingray, went 100mph,” Sam continues nonchalantly. “It was constant back and forth with the engineer, it was a lot like being a race car driver again, constantly raising the high speed. I just give the engineers the input they need.”

Sam’s demeanour of calm is reminiscent of an astronaut or fighter pilot’s; laser focused and unflappable, the contents of his sentences getting more remarkable as the conversation goes on.

“Clearly, Pikes Peak [which Sam tackled in 2016] was putting our lives in the hands of Arrow. If anything goes wrong, it’s a bad video, so that was probably the most challenging. Fifteen minutes and 156 turns, not to mention constantly climbing.

“One of the biggest problems is you don’t realise how much you use the steering wheel for support, when you’re driving in a performance atmosphere, of course. But there’s a six-way belt that stops you flopping around too much, along with a proper seat.”

The intimidating, foggy and blind turns of Pikes Peak and its ever-thinning air is a challenge for even the fittest of drivers; the fact Sam drove to the top of the mountain at an average speed of 80mph is nothing short of remarkable. It’s wonderfully symbolic of his achievements against the odds, too.

Despite his disability, Sam was clearly unintimidated by the prospect of pushing the 495bhp Corvette C8, as a light graze to the car’s wing attested. Able-bodied drivers have the luxury of feeling the limit of the car through their hands, feet and backside, so it is interesting to hear how Schmidt could feel the car losing grip:

“You can kind of tell when the car is understeering or oversteering, but you have to imagine a little bit,” he says with his characteristically matter-of-fact delivery. “What’s great about this technology is that it’s so instantaneous. It goes from my head to the computer and all the way back to the pedals and steering wheel in an unrecognisable nanosecond.”

After touching on the performance side of things and the physical sensations of driving, Sam moves onto what Arrow’s technology means to him on an emotional level:

“Getting my licence, driving my wife from San Francisco, that was really cool. You know, everyday stuff you take for granted.”

Remarkably, Sam became the first quadriplegic person to ever receive a driver’s licence after Nevada awarded him a restricted one back in 2016. However, Sam insists that he prefers driving on the track and that street driving is “boring and slow”.

Thanks to the march of technology, Sam has experienced two other very special moments this year. First was one that delighted thousands of IndyCar fans, when he drove the parade lap for the Indy 500, reaching 107mph in the process:

“That was a full-circle moment right there. You know, the number of fans, it was spectacular. To do it in the Corvette, a legendary American icon, the whole thing was very emotional.”

The second special moment Sam experienced was the irreplaceable opportunity to dance with his daughter at her wedding. Arrow built him an exoskeleton, known as the ‘SAM Suit’ (Semi-Autonomous-Mobility Suit), in just nine months to make it possible. During the suit’s development, Schmidt trained his body relentlessly so that he would have the strength to stand for the first time since his accident. “It was amazing. It’s the best day I’ve had in the past 21 years, period,” he recalls.

After tackling Goodwood, Sam plans to attend several of his team’s three IndyCar races in August. His star driver Pato O’Ward currently sits second in the standings just below another sensational young driver, Alex Palou. Sam’s plans for the Corvette?

“I’d like to modify it; we’ve already got aftermarket front-control arms, wider front wheels, as the car in stock form likes to understeer. With an extra 150bhp this will be a Ferrari-killer,” he says with a smile. 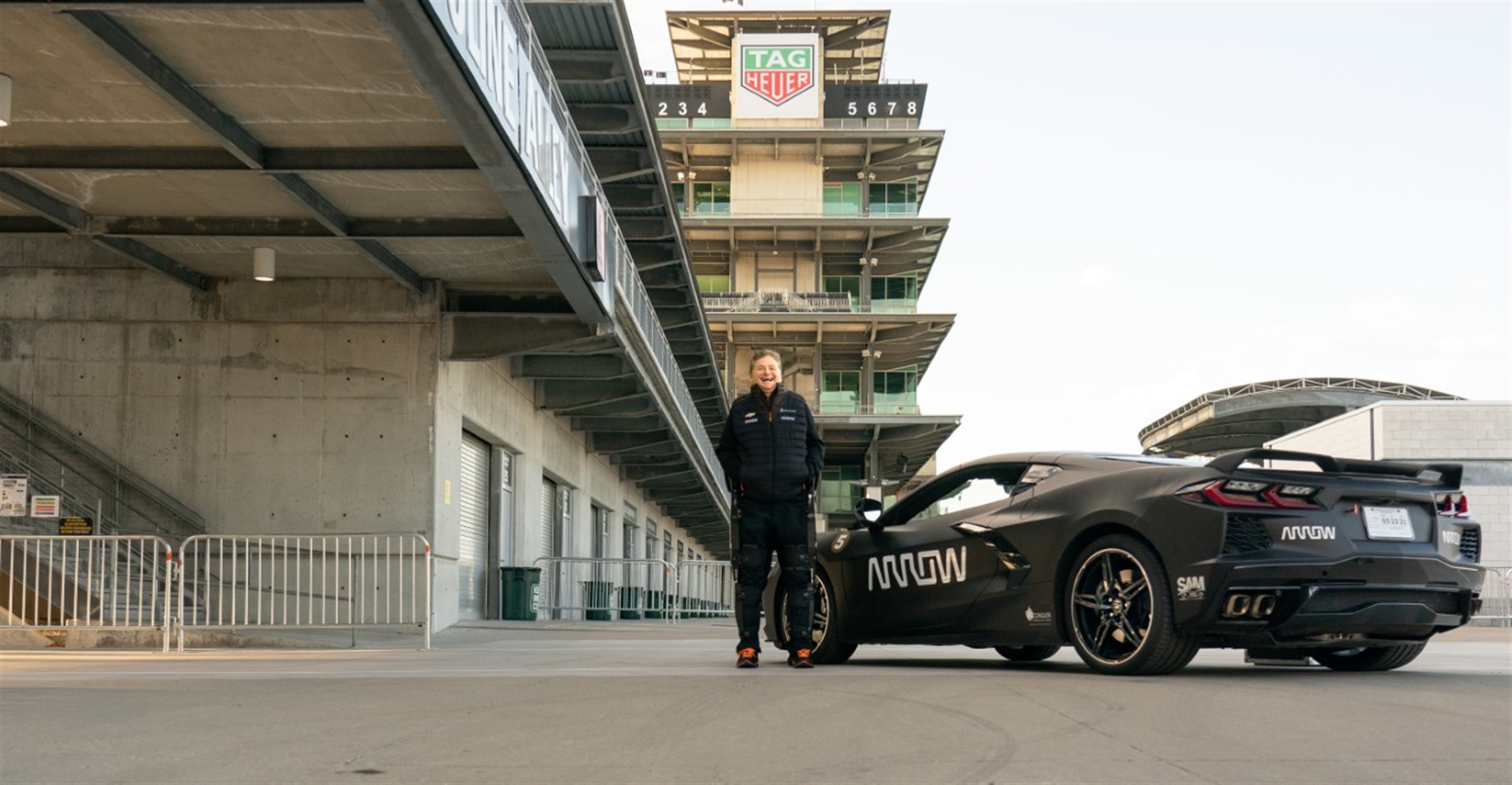 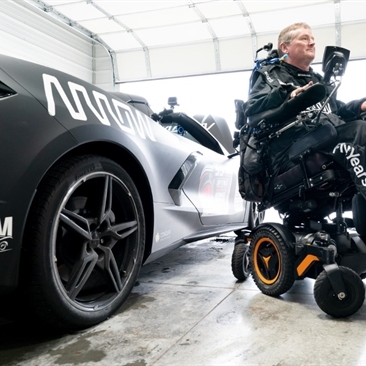 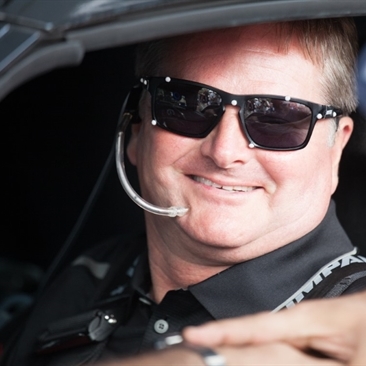 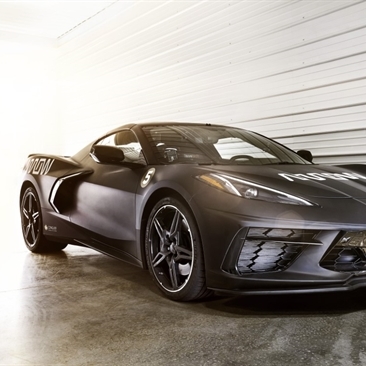 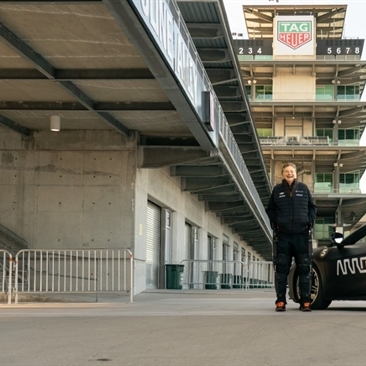 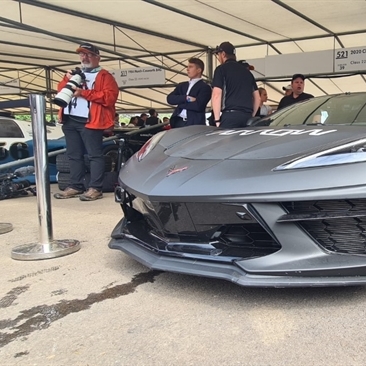 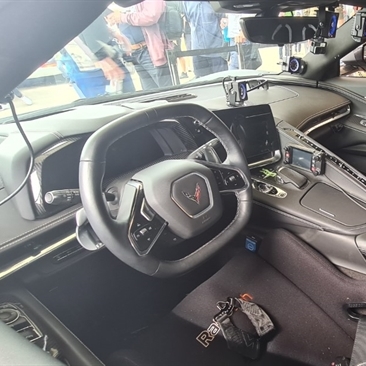 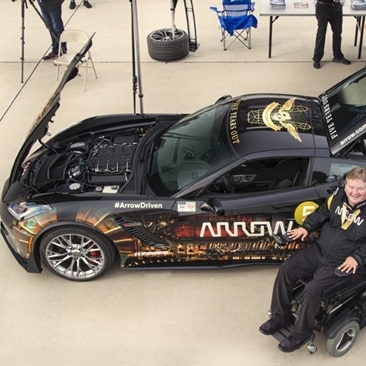 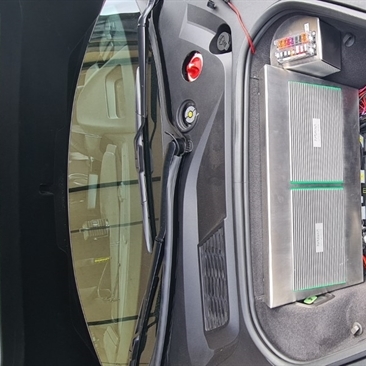