A duo of RAF fighter jets soared over Coniston Water on March 23, paying tribute to land and water speed record holder, Donald Campbell CBE. The RAF Hawks were seen dipping their wings over the Lake District on what would have been his 100th birthday.

Donald Campbell was a pioneer of speed, breaking several records over land and water during his lifetime. Campbell was killed on Coniston Water in 1967 during an attempt to set a water speed record in his jet-powered Bluebird K7 hydroplane.

Campbell was tragically killed when the hydroplane went airborne and somersaulted at over 300mph, before disintegrating as it plunged back into the water. The wreckage was eventually recovered in 2000 and Campbell’s body was found a year later.

The boat was later restored and donated to the Ruskin Museum in Coniston by Donald Campbells’ daughter, Gina, in 2006. This year’s flypast is reminiscent of one carried out by an RAF Vulcan bomber over Coniston Water the day after Campbell was killed in 1967.

Sadly, the RAF’s tribute to Campbell wasn’t publicised because of fears it could lead to the public flouting current lockdown measures. Instead, Gina was joined by trustees from the Ruskin Museum, who laid flowers at the lake as the jets flew overhead. They then visited Donald’s grave to pay their respects.

Gina was moved by the flypast, saying that she was “…touched by the RAF’s mark of respect and their act was a fitting tribute to my father who would have been thrilled by the gesture. I cannot thank the RAF and the crews who flew enough for their thoughtful tribute.

“[My father] loved Coniston and its people as I have done over the years and having a museum that tells the story is a lasting tribute.”

Flt Lt Eddie Craig led the flypast and said, "it was a huge honour to continue the RAF tradition of paying tribute to Donald Campbell and celebrate, not only his achievements, but also his spirit of courage and determination.”

Donald Campbell was the son of Sir Malcolm Campbell, who held 13 of his own land and water speed records. Donald’s desire to emulate the achievements of his father meant he set a combined eight speed records during his lifetime.

To this day, Donald Campbell is the only person to ever hold the water and land speed records simultaneously. Donald and his father held an incredible total of 21 speed records between them. 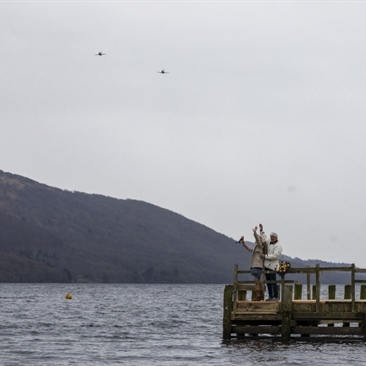 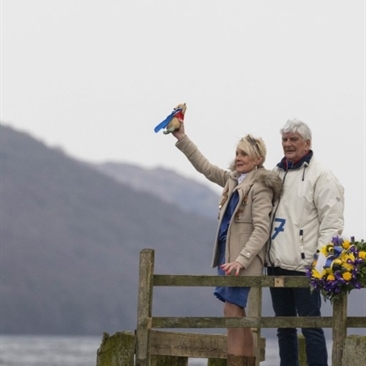