How many components are needed to build the average piston-powered car? The answer is approximately 30,000. Once this giant engineering puzzle is completed, motion is achieved through an orchestra of metal, rubber and plastic.

Let’s assume the Citroën 2CV is on the lower end of this scale. The ‘Tin Snail’, as it is affectionately known, is remorselessly simple; just two-cylinders (air-cooled, of course), four deckchair-style seats and fewer instrument dials than your average motorcycle.

And then there’s the car I’m about to drive – The 2CV Shop’s new 2CeV, which in a wonderful case of irony uses 21st century technology to make an already simple car even simpler. The car started life as a 1988 2CV but, as the name suggests, it has had its meek 602cc two-cylinder engine transplanted with an electric motor and a box of batteries. Can it take the dubious honour of being Britain’s simplest car?

Simple it may be, but the 2CeV’s loss of its signature thrummy and underpowered little engine raises an early concern; has it lost its heart and soul? The 2CV Shop’s owner and Deux Chevaux aficionado Darren Arthur offers some early reassurance: “This is not a performance-related kit; we didn’t want to lose the car’s DNA, and I think we achieved that. We tried to keep it the same as the petrol version in terms of power. It’s no tyre smoker, we didn’t want that.”

As with many of you reading this, I’m hardly averse to a bit of tyre smoking, but Darren’s words are a source of comfort as I twist the handle and lower myself into the squidgy driver’s seat. The door is about as thick as the laptop I’m typing this on.

The car’s factory-fresh appearance is the next thing to make an immediate impression. “There’s not much that isn’t new,” Darren explains. “The chassis, interior, body panels, running gear, wheels and tyres are all brand new. There’s not much that hasn’t been replaced.” This is hardly surprising after being given a tour of the Aladdin’s cave that is The 2CV Shop. The company offers 4500 different lines of new parts from fresh bodyshells to wheel nuts; there’s enough stock to effectively build an entirely new car from scratch.

Cast your eyes around the interior and things are exactly as you’d expect; spartan yet oozing with character. The pancake-flat windscreen, umbrella-shaped handbrake handle and bizarre telescopic gearlever are all present and correct. The only clue that things may not be as they seem is the addition of an aftermarket dial showing the car’s state of charge.

Twist the key, wait for the sound of two clicks as the EV system initiates, and it’s time to set off. “You don’t need to use the clutch when pulling away; just pick a gear and leave it. I usually choose third,” Darren advises. Taking note, I resist the urge for a customary stamp on the clutch pedal, pull the gearlever towards me for third, and squeeze the accelerator pedal.

You’re probably thinking that sending twice as much torque through a standard 2CV gearbox sounds like a recipe for disaster, but thankfully Darren and his team have already thought of that: “We mapped the car so that it doesn’t give full torque straight away; that tends to turn the ’box to jelly. The mapping was also another way of keeping the car’s DNA intact.”

Now I am content that the gearbox isn’t about to meet its demise, it’s time to put Darren’s words to the test. With the accelerator now buried in the floor, the speedometer needle makes a slow but determined climb up the ladder-like notches on the Jaeger dial. Then, an unexpected but welcome reward; a crescendo of motor noise.

The space-age whir of an electric motor should go with the 2CV driving experience about as well as a bottle of Ricard on an empty stomach, but somehow it works. Perhaps it’s the authenticity of it? After all, there can’t be any eye-roll-inducing audio-fakery coming through the speakers when the car doesn’t have any.

Soon I reach the nearby Wiltshire town of Longbridge Deverill, which provides the perfect opportunity to test the 2CeV in the urban environment Darren is confident it will suit perfectly. “If you live in London and you want an everyday classic this is perfect, because a petrol car is a lot more maintenance. With this, you don’t have to worry about getting it started after keeping it in the garage all winter. Just turn the key and go,” he says. “Then there’s the environmental regulations that have come into big cities that mean you get charged for driving a petrol car. The 2CeV gets around all that.”

That all makes sense, but driving a car without power steering and servo-assisted brakes in stop-start urban traffic could very easily become an act of self flagellation, Congestion Charge avoidance or not. Happily, the 2CeV passes the test with flying colours.

A three-point turn reveals that the delightfully spindly steering wheel feels heavier at low speed than a modern car, but the narrow tyres and featherweight 630kg kerbweight compensate. The brakes take a little more getting used to, and those unfamiliar with classics could initially find the long, spongy feel of the pedal pretty alarming. However, the 2CeV has inboard disc brakes at the front, so once you’ve acclimatised the car stops adequately enough, helped by the electric motor’s regenerative braking.

So far, I have somehow avoided the usual 2CV clichés about eggs, ploughed fields and hat-wearing peasants, but there’s one cliché that simply must be mentioned because annoyingly, it’s true; this is a car that makes you smile.

The drive through town makes this as obvious as the infantile grin on my own face; passers-by smile and wave, and other motorists benevolently let me out of junctions in full knowledge that they are sentencing themselves to a top speed of 40mph for the remainder of their journey.

Leaving town with a queue of modern traffic in tow, it is time to find some trusty English B-roads to find out how the 2CV’s comically supple yet wallowy suspension fares. Predictably, the fore-aft linked suspension set-up deals with bumps and potholes remarkably well, masking their presence from the driver with such proficiency that it makes many modern luxury cars feel stiff by comparison.

Then there’s the corners. When under load, the ultra-soft suspension produces hilarious albeit disconcerting levels of body roll. Despite this, there is a surprising level of grip, helped by the fact that the unique interconnected design effectively lengthens the wheelbase on one side of the car when cornering. This combined with the 2CeV’s long suspension travel and skinny tyres means that rolling the car is almost impossible – you’re more likely to fall out of the roof or understeer into the nearest field.

With the car parked back at The 2CV Shop it is time for some reflection. Has the specialist managed not to dilute the driving experience with the loss of the engine? The answer is a resounding yes. The car still feels unmistakably like a 2CV in all its Gallic, quirky brilliance, albeit one that is more refined and easier to drive and maintain than the combustion-powered classic. This wouldn’t have been the case had Darren and his team given in to the temptation of making the car more powerful than it was designed for.

Another thing to consider is a wider and more philosophical question; is converting a 2CV to electric power sacrilegious? On this occasion, the answer is no. Citroën made nearly four million 2CVs between 1948 and 1990, which means a combustion-powered example is easily found; there is also a comprehensive list of remanufactured parts, as Darren’s HQ demonstrates. The 2CV Shop’s EV conversion simply makes the car more relevant, available and usable in a modern world, which can only be a good thing.

Finally, there’s the thorny issues of price and range. The 2CeV is available as either a conversion kit or a complete turn-key car, with prices starting at £16,400 (fitted) and £29,000 respectively. The quoted range is 55 miles with a charge time of around three-and-a-half hours – fast charging isn’t available.

Cynics will look at the 2CeV’s quoted range, price, safety features, equipment and performance figures, and scoff – but they’re missing the point. This isn’t a car to commute in, nor is it designed for long road trips or fast driving. Instead, it’s a car for pleasant, relaxed drives on a summer’s day with the roof back and a smile on your face – and for that, little gets close.

The 2CeV is available to order from The 2CV Shop now, with first deliveries expected to take place towards the end of the year. For more information on pricing, specifications and options, click here. 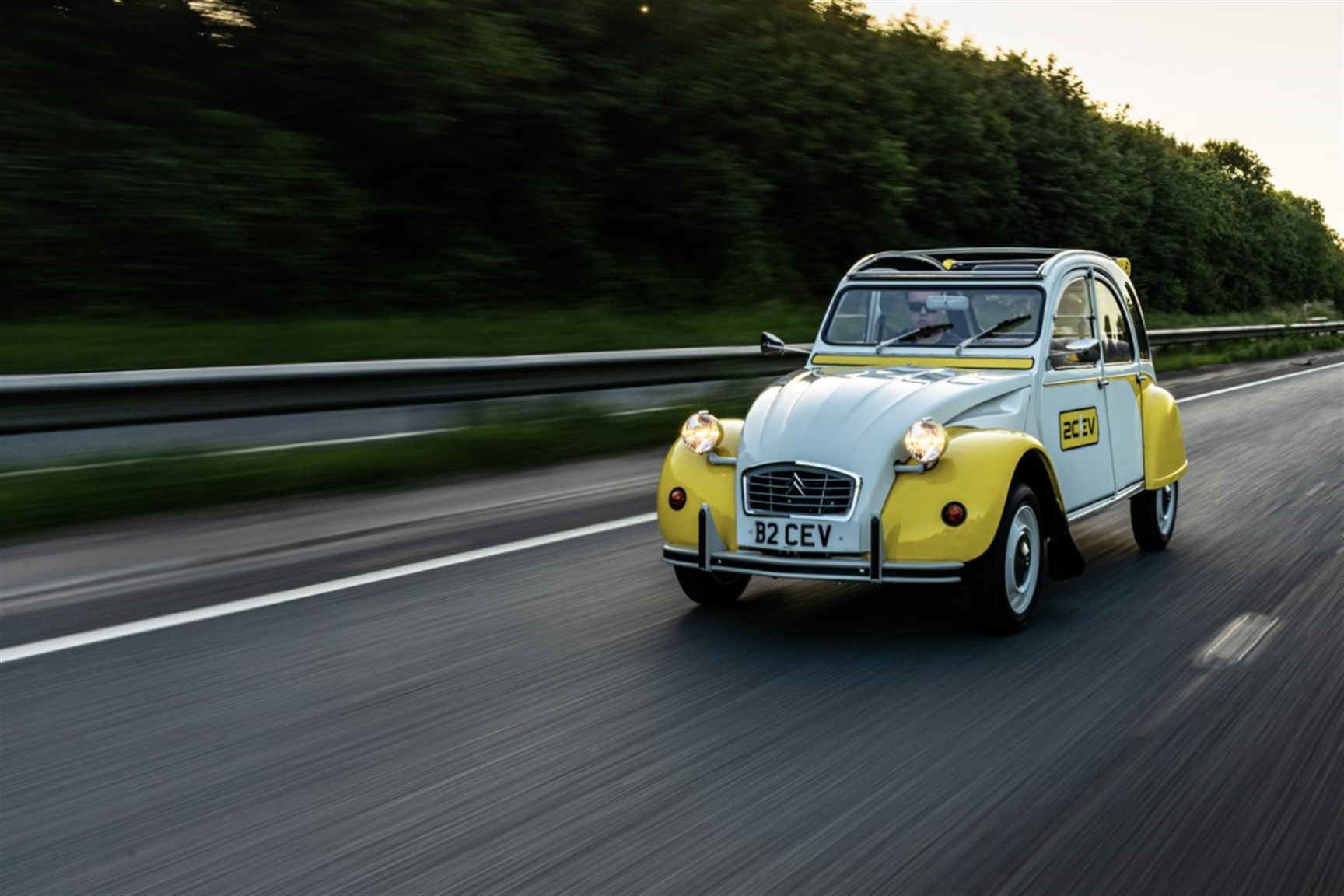 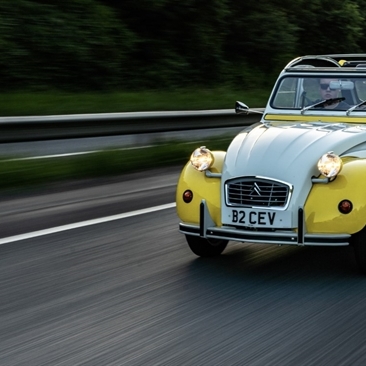 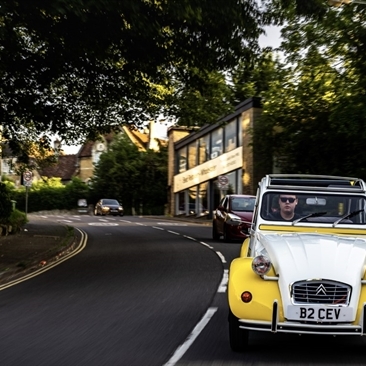 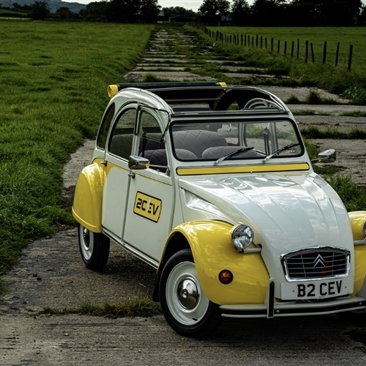 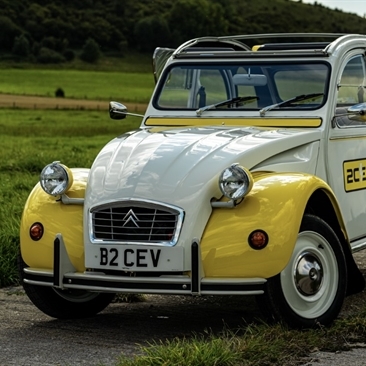 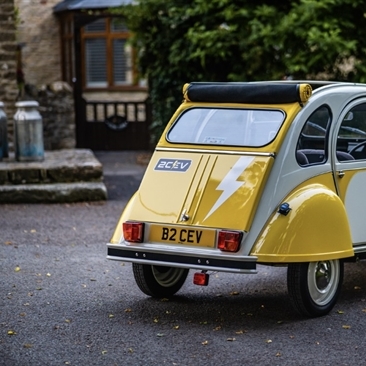 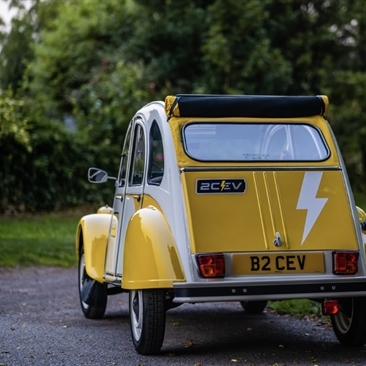 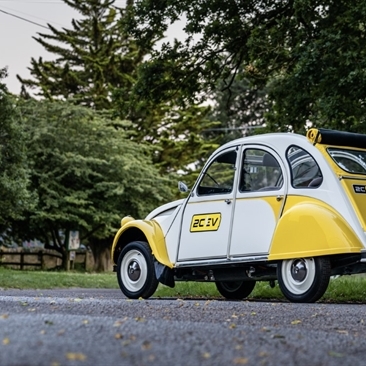 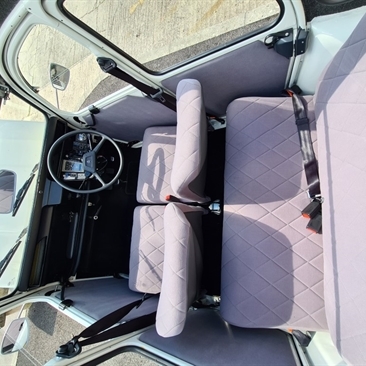