Welcome to the restomod 911 pack, Theon Design Hong Kong commission. You’re looking good today with your widened arches, your chunky Fuchs lookalike wheels and your rather inviting leather-clad interior. And there’s promise a-plenty in your uprated aircooled flat-six and six-speed manual. At £300,000 you sure ain’t cheap – but you’re undercutting many of your rivals.

You might not be surprised to hear that this latest addition to the elite 911 restomod club, which joins cars from the likes of Workshop 5001, Paul Stephens, DP Motorsport, Gunther Werks and the best known of all, Singer, is based around a third generation 911, the 964.

Why? Because a 964 still feels and looks like a classic 911 but it’s stronger and safer than earlier models, was galvanised so is far less prone to rot, has MacPherson strut coil spring suspension instead of torsion bars and is still relatively plentiful and affordable compared with the more sought after first and second generation 911s.

With its aircooled flat-six and trailing arm rear suspension, a 964 drives like a ‘proper’ 911 too, without having the more complicated electrics of the esteemed 993 or the water-cooled engines of 996 and beyond. But like any car of the 1980s or ‘90s, its ergonomics, interior quality and on-the-limit dynamics can be found lacking.

The perfect recipe for an upmarket restomod conversion then…

Theon Design, led by former BMW, JLR and Lotus designer Adam Hawley, takes a donor 964, strips it back to a bare shell, restores what needs to be restored and then builds it into the car you see here – or something like it, as this is a customer car, and specifications will vary according to the buyer.

So, picture that bare shell, stripped and realigned (because they tend to twist and sag with age). First choice is whether to keep it all-steel, as this one is, with reprofiled wheelarches that take the bodywork to 10mm wider than an original 964 Turbo, or to go all out with carbon fibre panels to the same shape – but with less weight.

The shape of the arches, by the way, was mapped out on 3D modelling software as a cross between the ST and RS profiles. And though they’re wider than the Turbo arches, the car is still 50mm narrower than the current 911. The RS-style bumpers are carbon fibre and the mirrors were inspired by Speedster units, though electrically adjustable.

And then you’ll need to choose your colour. This one is in a subtle metallic khaki green that shouldn’t work but absolutely does, and you could say the same about the graphics and the yellow carbon fibre and kevlar wheelarch liners. Anyway, from that point, there are several more choices to be made…

First up, the engine: the choices are 3.6, 3.8 or 4.0-litre versions of the flat-six. This is the 3.8, promised to develop 350bhp and 300lb ft, though this engine has been dyno’d at 371bhp at the flywheel. Whatever the capacity, all are overseen by well-known 911 engine builder Nick Fulljames and will be as beautifully detailed as this example. They run modern fuel injection and a Motec ECU, with the nasty plastic engine covers dispensed with and the aircon and power steering pumps on the back of the engine ditched in favour of electric units in the front boot, out of sight, better positioned for weight and no longer sapping engine power.

Transmission? There are a few choices, and this car has been swapped from its original Tiptronic semi-auto to a new, Porsche-supplied 993 six-speed manual. The suspension options as ever with these cars are wide but Theon Design has opted for KW Variant 3 coilovers all round on this car, bushes carefully matched to purpose rather than replacing all with polyurethane or similar. The crucial corner-weighting and geometry set-up has been carried out by Centre Gravity.

And the result? Well the car looks spot-on, sitting just right on its 17in Fuchs copies and Michelin PS2s (225/45 and 275/40) and it fires up swiftly and smoothly. It’s about to head off to its owner in Hong Kong, so there’s no time for day-long drives but we’ve got an hour on rural Oxfordshire’s finest twisties.

What’s immediately obvious is that this 911 is perfectly docile when you need to be. The controls are light but it’s the engine that delights; it spins up quickly but with enough flywheel inertia and torque to keep take-up smooth. And then you begin to push it harder and it starts to sing as the car does that little 911 squat and heads off down the road at an exceedingly rapid rate. It’s exciting with being overly-dramatic, and on wet roads it’s easy to keep progress smooth by keeping the revs relatively low rather than screaming it through the gears.

Not that it isn’t fun to do a bit of screaming… from inside the car the exhaust sounds sporting but never intrusive, but that’s easily changed by a switch on the dashboard that opens up a valve in the exhaust for added aural hooliganism. Nice.

What’s clear is that the balance and responsiveness is so much better in this car than a standard 964. Weight distribution is 56:44 rather than the stock 70:30, and weight even in this steel-bodied, sunroof car is 1248kg with a full tank of fuel (at 53kg). Losing the sunroof would take out 20kg; switching to carbon fibre would save 100kg. With a few more tweaks a dry weight of just over 100kg would be achievable without sacrificing the comfort and useability.

And seeing as we’re talking comfort, what about the interior? Well it feels pure 911, so it’s a surprise to realise how much it differs from a standard 964. It’s better laid out, the quality of materials is in an entirely different league and the ergonomics hugely improved. Even the interior door handle is still classic 911 but moved forward and upwards, and turned 180 degrees, for much easier operation. A clever touch.

The Recaro front seats are retrimmed in beautiful Spinneybeck woven leather, the rears are remade, the Nardi steering wheel is custom trimmed and all the control knobs are aluminium. The sound system is hidden away, operated by a phone via Bluetooth – and there’s a magnetic wireless charger for the phone in the dash. A hidden screen for the reversing camera flips down when required. Even the front boot and the engine bay are trimmed to a similar standard – the fuel filter even has its own little green leather cover to hide its inappropriately shiny aluminium.

So, a worthy new member of the restomod club? It certainly seems that way, and with just 25 964s planned by Theon Design, a relatively exclusive one. There’s no reason the treatment has to stick with a 964 of course… Adam would love a commission to build a flat-six 914 to the same style for example. Now that would be interesting! 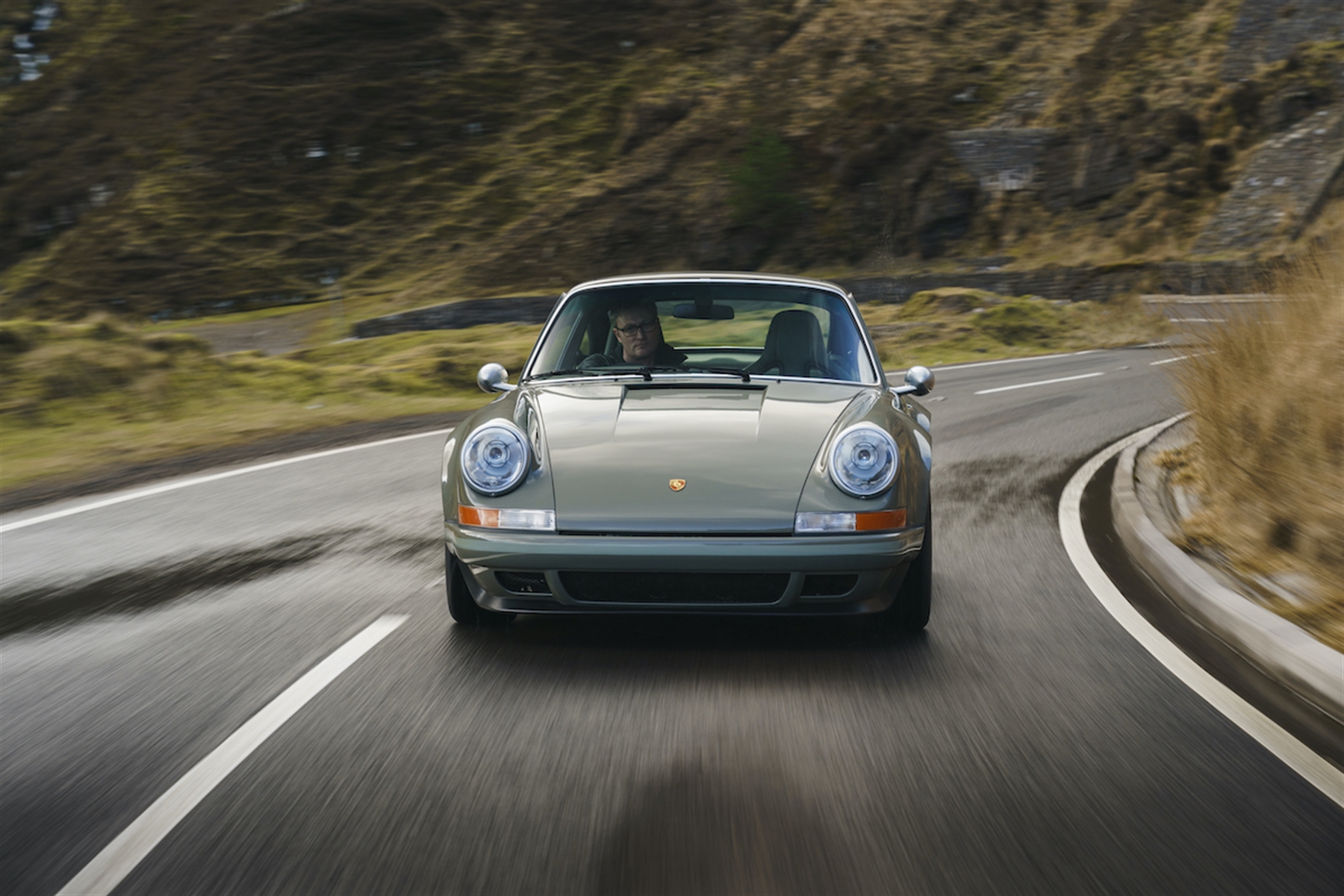 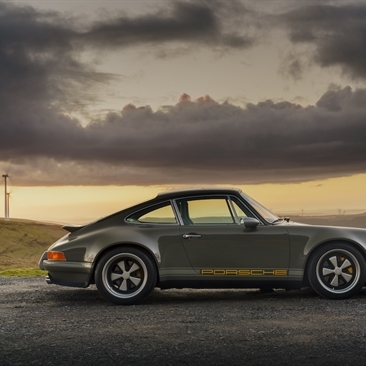 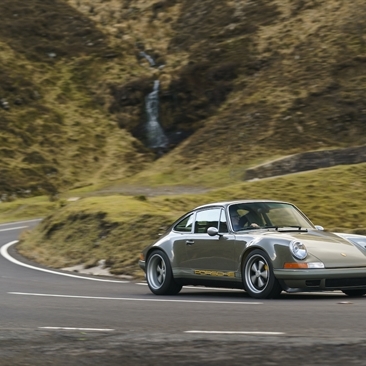 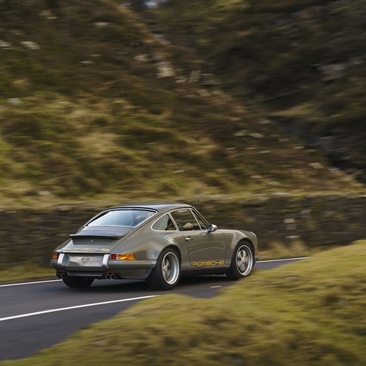 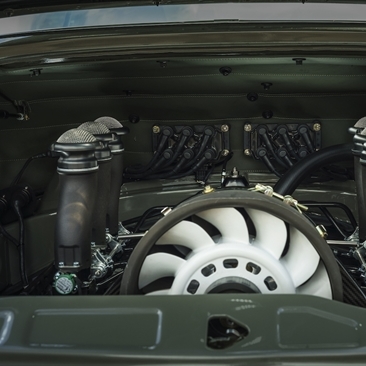 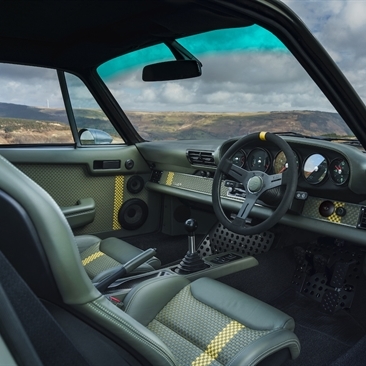 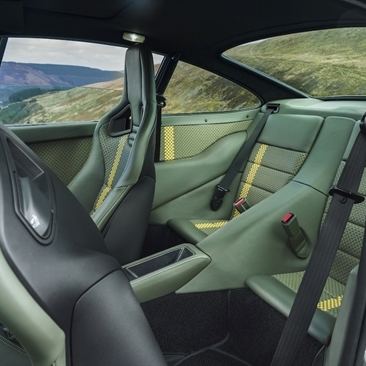 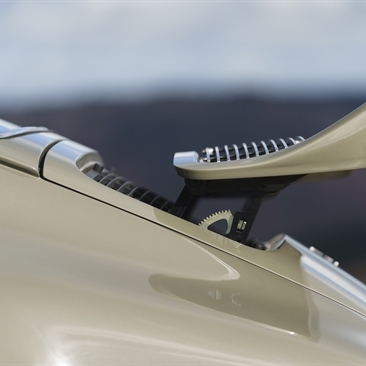 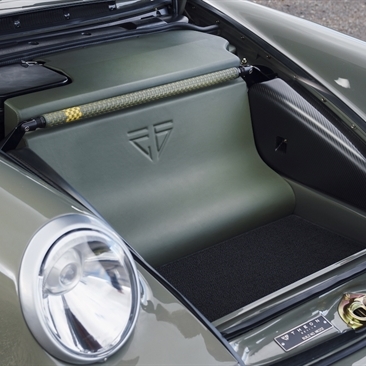