Bonhams returns to the Monterey Peninsula for the August 2021 Car Week, and the Quail Lodge Auction. With more than 130 exceptional collector cars to cross the block, each car will preview on August 11-13 at Quail Lodge & Golf Club. For inquiries please contact a specialist.

The Bucciali marque possesses the rare and ironic quality of being both a pioneering and esoteric manufacturer. This one-of-a-kind Saoutchik-bodied car was created to showcase the engineering genius of the marque’s founding brothers, Angelo and Paul-Albert Bucciali. The car boasts forward-thinking technologies like independent suspension and front-wheel-drive, well before the lauded Citroën Traction-Avant.

In 1930 the car took a starring role at the Paris Salon, before being sent to America and displayed at the New York and Chicago Motor Shows in 1931. La Marie remained in Europe until 1985 when it returned to the US after being bought by California’s prestigious Blackhawk Museum. La Marie’s sale by Bonhams at Quail Lodge heralds a once in a lifetime opportunity to take ownership of this exquisite front-wheel-drive trailblazer.

Other than the legendary Porsche 917, it’s very difficult to think of a more iconic racing car than the Ford GT40. This car, chassis J-9, is particularly special; it is one of just ten examples built and used in period and was tested by Formula 1 world champion Mario Andretti. In 1967, a cutaway illustration of this very GT40 graced Road and track magazine and the car has rightfully occupied the limelight ever since, participating in prestigious events including the Goodwood Revival, Goodwood Members Meeting, 60th Anniversary at Road America and Indianapolis Motor Speedway Brickyard Invitational. Chassis J-9 was comprehensively restored during 2018 and 2019 and retains its original chassis tub, chassis number tag and sub-components. J-9’s new owner will have the opportunity to enter the world’s most exclusive historic racing events and a car with provenance and rarity that few can compare with.

Acquired by its current owner’s father 57 years ago, this Mercedes spent the first years of its life in its native Germany and the UK, before making its way to the United States in 1954. The ‘S’ was created shortly after the historic merger of Daimler and Benz and proved to be an adept performer at hill climbs, race track and on the road. A defining feature of the car is its Roots supercharger, which is only activated when the accelerator is fully depressed and allows the 6.8-litre six-cylinder engine to produce an impressive 180bhp. The engine was rebuilt in the early 2000s and was repainted in raven black after the current owner’s father passed away in 2016.

Chassis 3179 is one of just two surviving cars blessed with the splendour of Figoni et Falaschi coachwork and emerges from a fastidious decade-long restoration. French industrialist Gilbert Fayol commissioned this T26 in 1948 and the car was promptly shown at the Concours of Deauville in July of that year. Chassis 3179 changed ownership in 1954 and was saved from a French scrapyard in 1967 before being restored in dark blue and beige leather in 1989. In 1992 the car was offered for sale at Retromobile and remained in France until the late ‘90s when it passed into the Rosso Bianco Collection in Germany. The current owner purchased the car in 2010 and enlisted the help of the French Talbot Lago Owners Club and several renowned automotive historians to facilitate its restoration to original specification.

Winning seven of the eight World Sportscar races it entered for the Autodelta team, the Tipo 33 TT 12-cylinder was the most successful Tipo 33 variant, clinching the 1975 FIA Championship title with Derek Bell and Henri Pescarolo at the wheel. Alfa retired chassis 010 after its winning season, replacing it with the latest Tipo 33SC 12s and Turbos for 1976 and ‘77. The car was then sold to an aspiring collector and historic racing driver in 1980 went on to make regular appearances at American historic racing events, taking several Monterey Historic Automobile Races victories. Presented in its original 1975 livery, chassis 010 is one of just five surviving cars of its type and is considered to be one of Alfa’s most significant post-war racing cars.

Chassis 0233 made its first appearance at the Geneva Motor Show in 1952, undoubtedly stunning attendees with its beautiful Ghia coachwork and signature 2.5-litre Colombo V12. An appearance at the Turin Motor Show followed and the car was then sold to its first owner in Italy in July of 1952 for three-million Lira. Ferrari bought chassis 0233 back later that year and repainted the car in its current hue of metallic blue. The Ferrari was shipped to New York in 1953 and has remained in various parts of the United States ever since and its engine was sold to L. Tom Caulfield of Wisconsin during the late ‘60s. Chassis 0233 was reunited with its engine and restored around a decade ago and received coveted Ferrari Classiche certification to go with it. Since then, the 12-cylinder Ferrari has made appearances at the Pebble Beach Concours d’Elegance and Cavallino Classic.

A mere 213 F40s were destined for delivery to the United States and this highly original matching numbers example is one of them. With just over 16,000 original miles from new, this F40 was built in the final year of the iconic car’s production run and received Ferrari Classiche certification in February of this year. The car is accompanied with original tools, books and an extra set of seat upholstery and received a major $100,000 service in 2017 at 15,800 miles. As the last Ferrari overseen by the marque’s legendary founder, the F40 is one of the company’s most revered and iconic models.

A crowning achievement for the three-pointed star, the 300SL Gullwing is descended from the German marque’s highly successful W194 Le Mans racer. This car rolled off the production line in 1955 finished in Graphite Gray with red leather and was promptly shipped to New York. It remained in the first owner’s possession in California until 1979, and has remained in the family of the second owner until 2019 when it was purchased by the consignor. Shortly after the current owner purchased the car, it was sent to 300SL expert Hjeltness Restoration of Escondido, California for refurbishment. Today, this matching numbers example is immaculately presented with black paintwork and still bears its original red leather interior.

Just 25 continuation DB4 GTs were handbuilt at Aston Martin’s famous Newport Pagnell factory and this car is one of them. Elegantly finished in Moonbeam Silver and dark red leather, the car was delivered new to its current owner in Texas in 2018. With less than 100 miles on the clock and a plethora of factory-fitted options including headrest embroidery, spotlight exterior lighting and electric steering, the sale of chassis 0205/L is sure to garner a great deal of interest. Despite being just three years old, this DB4 is fully eligible to participate in historic racing events and benefits from a raft of FIA compliant safety features including a roll cage and race-spec fuel system.

Chassis 1144 was delivered new to the United States shortly after its completion in 1955 and is one of only 181 left-hand drive models to roll off the production line. Originally finished in grey with black leather, the first owner retained the car for 12 years before selling it in 1968. The second owner had the car repainted in Rosso Capri but otherwise maintained the Lancia’s excellent level of originality. After the second owner passed away, 1144 was given to a friend at Pebble Beach and was then sold to an Australian owner in 2003. A five-year restoration totalling $250,000 ensued and the car was painted in the stunning black paintwork with red leather seen today. The car entered the Canadian consignor’s collection in 2013 and is offered with a three-inch-thick binder of receipts and documentation. 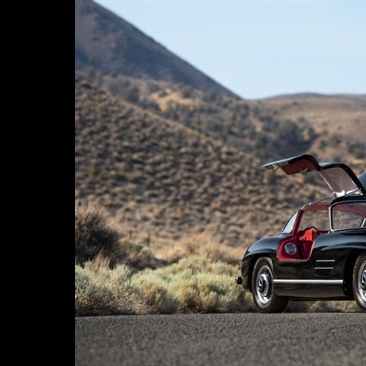 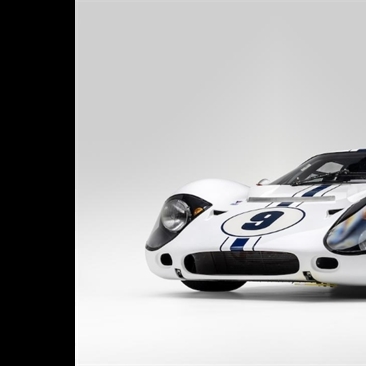 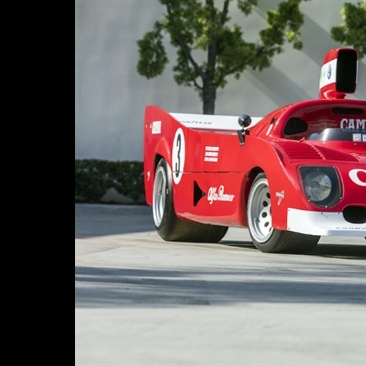 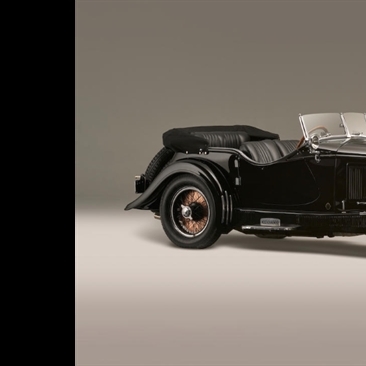 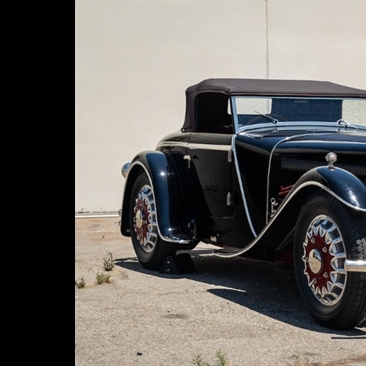 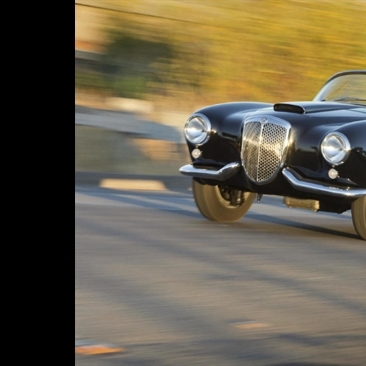 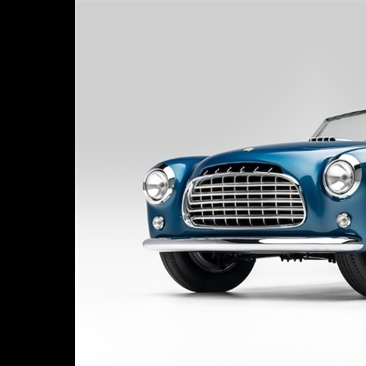 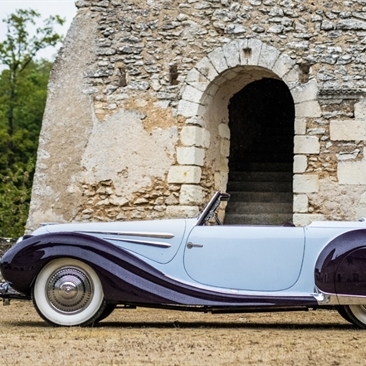 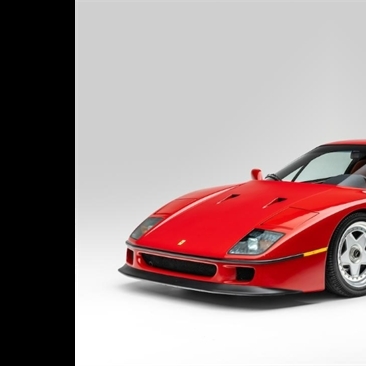