After a year’s hiatus and much speculation and uncertainty, the Goodwood Festival of Speed made a triumphant return on July 8-11, after it received last-minute confirmation as a COVID pilot event in June. Following the good news, thousands of fans descended on the famous Sussex estate for a scintillating summer weekend of automotive entertainment. In no particular order, we chose 15 highlights of the packed four-day schedule:

The inaugural Driftkhana events attracted plenty of attention as the colourful cars slid their way up the Hill, creating an exciting orchestra of noise and tyre smoke in a heart-racing spectacle. James Deane demonstrated his enviable talent behind the wheel with some spectacular tyre-shredding runs in his eye-catching Falken-liveried BMW E92 M3; as did Alexandre Claudin in his bewinged brute of a 1968 Dodge Charger. The Mustang Mach-E 1400 of Richard Westbrook also made a flamboyant journey up the Hill, albeit a quieter but equally smoky one.

Goodwood is one of the only places on Earth where onlookers can witness multiple varieties of Ferrari’s legendary and famously valuable 250GTO being driven in anger. No other 250GTO can claim the rarity of chassis 2819GT; it was built in 1962 as a one-off to compete in the Le Mans 24 Hours for Scuderia Serenissima. Unfortunately, the car retired four hours into its Le Mans appearance, but since then it has become a star of Goodwood, regularly appearing at the Revival and Festival of Speed. The Ferrari was famously damaged at the 2015 Revival, but it had better luck at this year’s FoS timed shootout, finishing an excellent 18th among much more modern machinery.

The BRX Hunter was designed to be peerlessly quick over rough terrain, so it’s only appropriate that it was driven by nine-time WRC champion Sebastien Loeb. The legendary French driver wrestled the 400bhp, 1900kg machine up the narrow Hill with the ease, precision and speed you’d expect, despite its dramatic pitching and rolling. Unfortunately, Loeb’s BRX Hunter retired from the Dakar Rally earlier this year, but he aims to make amends in next year’s event with his new co-driver Fabian Lurquin.

A host of mouth-watering cars crossed the block at this year’s Bonhams Auction, three of which got tantalisingly close to the £1m threshold. Of these, it was two beautiful historic Italian Grand Prix cars that took joint honours as the most expensive: a 1957 Ferrari Dino 246/60 and 1928 Maserati Tipo 26B. Both sold for £967,000 each including premiums, followed by a UK-spec 1990 Ferrari F40 which sold for £883,000 with fees. The next most expensive car not bearing the prancing-horse emblem was a 1962 Aston Martin DB4 Series IV Vantage, which sold for £327,750.

Duncan Pittaway’s Bill Thomas Cheetah proved to be one of the event’s most popular cars, and with its bellowing small-block V8 it was certainly one of the auditory highlights of the weekend. The car first appeared at the Festival of Speed back in 2018, after being hastily built in just nine weeks after it was invited to attend. This year, the car looked even better than it did on its debut after being painted in its original red livery. The Cheetah also performed excellently: it placed 20th in the Timed Shootout and was the second fastest GT car.

A variety of fan cars made an appearance at this year’s Festival of Speed, from the cutting-edge and diminutive McMurty Speirling single-seater prototype, to Gordon Murray’s famed Brabham BT46 Formula 1 car. The most crowd pleasing of all these ground-effect pioneers was undoubtedly the monstrous Chaparral 2J Can-Am. The 2J’s unusual bodywork conceals two engines, one being a 650bhp small-block Chevy V8, and the other a two-cylinder two-stroke sourced from a Howitzer tank to power its fans. The car was lightning fast in period, qualifying at least two seconds faster than the competition before being promptly banned on safety grounds.

It’s not often that you can get up close and personal with one of Porsche’s most iconic and valuable Le Mans cars, but the Festival of Speed is no ordinary event. The Moby Dick 935 was the third and final development of Porsche’s works racing cars developed from the 930 Turbo road car. The 935 got its nickname from its curvaceous bodywork and long swooping tail designed for low drag – a concept that demonstrated its effectiveness brilliantly with a 228mph top speed on the Mulsanne Straight in the 1978 Le Mans 24 Hours.

The Lotus 72 was undoubtedly one of Colin Chapman’s greatest creations. The 72 was so good in fact, that it raced for five seasons from 1970-75, seizing three championships, 20 race wins and 39 podiums in the process: an unthinkable feat in modern Grand Prix racing. Just laying eyes upon the iconic black-and-gold JPS-liveried car is a privilege in itself, but witnessing Emerson Fittipaldi reunited with the car he drove to the 1974 championship was truly special. Fittipaldi looked indistinguishable from his younger self, wearing his distinctive blue-and-orange helmet as he fearlessly attacked the Hill in his old car.

The Lotus 79 was another iconic Grand Prix car that was reunited with its legendary world championship-winning driver: Mario Andretti. The 79 was another demonstration of Colin Chapman’s brilliance as the first F1 car to harness the power of ground effects. It was ruthlessly effective and the 79 proved almost unbeatable, with Andretti taking six victories and one podium on his way to the 1978 title ahead of Ronnie Peterson. The Lotus’s Cosworth DFV V8 roared into life once again at the Festival of Speed and was unquestionably one of the most exciting F1 cars to grace the event.

The Cartier Style et Luxe is always a highlight of the Festival of Speed, and this year’s boasted a glittering array of models. The judges were spoiled for choice when trying to select a winner from the eclectic mix of immaculately presented cars; a Mercedes-Benz 300SL Gullwing and Lamborghini Countach LP400 were particularly well received. In the end, a 1974 Lancia Stratos HF belonging to famed designer Marc Newson took the top honours.

The Festival of Speed celebrated the 70th anniversary of BRM in style by letting a fearsome Type-15 V16 Grand Prix car tackle the Hill. The Type-15’s specifications are extraordinary for a car designed in 1947: its 16 pistons can rev up to 12,000rpm and develop an incredible 600bhp with the help of a two-stage centrifugal supercharger. Historic racing car specialist Hall and Hall is building three Type-15 continuation cars, so there will be even more opportunities to hear the unique sound of a BRM V16 engine in the future.

Rob Bell saw off a stern challenge from Travis Pastrana and his gymkhana Subaru WRX STI to win the Festival’s Timed Shootout with a blistering time of 46.20 with his McLaren 720S GT3X. The GT3X is effectively a GT3 race car that has been relieved of the shackles of any technical regulations and then sold to customers as an extreme track-day machine. Bell was an excellent ambassador of the car’s capabilities by putting in a fearless and inch-perfect drive that extracted every bit of performance from the 710bhp twin-turbo V8.

Roger Penske was honoured at this year’s Festival of Speed as part of The Maestros – Motorsport’s Great All-Rounders theme. The Captain was accompanied by many of Penske’s greatest cars from a mix of disciplines including IndyCar, Formula 1 and NASCAR. Highlights included Penske’s first Indy 500 entry, the four-wheel-drive Lola T152, as well as the McLaren M16B that Mark Donohue drove to the first of the team’s 18 Indy 500 victories in 1972. Roger showcased his talent as a driver with a spirited drive up the Hill in the Porsche RS Spyder his team used to win the 2008 Sebring 12 Hours.

The Aston Martin Valkyrie has been eagerly anticipated by enthusiasts since it was announced four years ago, and at the Festival of Speed it finally made its exciting dynamic debut in front of thousands of stunned spectators. The Adrian Newey-designed bodywork produces similar levels of downforce to an LMP1 car and can generate 4.5G of lateral load when cornering; unprecedented figures for a road car. The Valkyrie’s naturally aspirated 6.5-litre Cosworth V12 screamed its way to the top of the Hill and its 10,500rpm limiter, much to the delight of those in attendance. This undoubtedly won’t be the last time we witness a Valkyrie at the Festival of Speed, as all 150 have sold out and deliveries start imminently.

Lotus was anointed as the Festival of Speed’s featured marque this year, and the brand was celebrated with an innovative augmented-reality enabled central display inspired by its trademark lightness. Lotus exhibited a large stand at the Festival, which showcased the upcoming 2000bhp Evija EV hypercar, an Exige Final Edition and the newly revealed Emira sports car. The Emira proved to be very popular and was well received in its public debut, and the Evija entertained onlookers in dramatic fashion with tyre-shredding starts to its runs up the Hill. 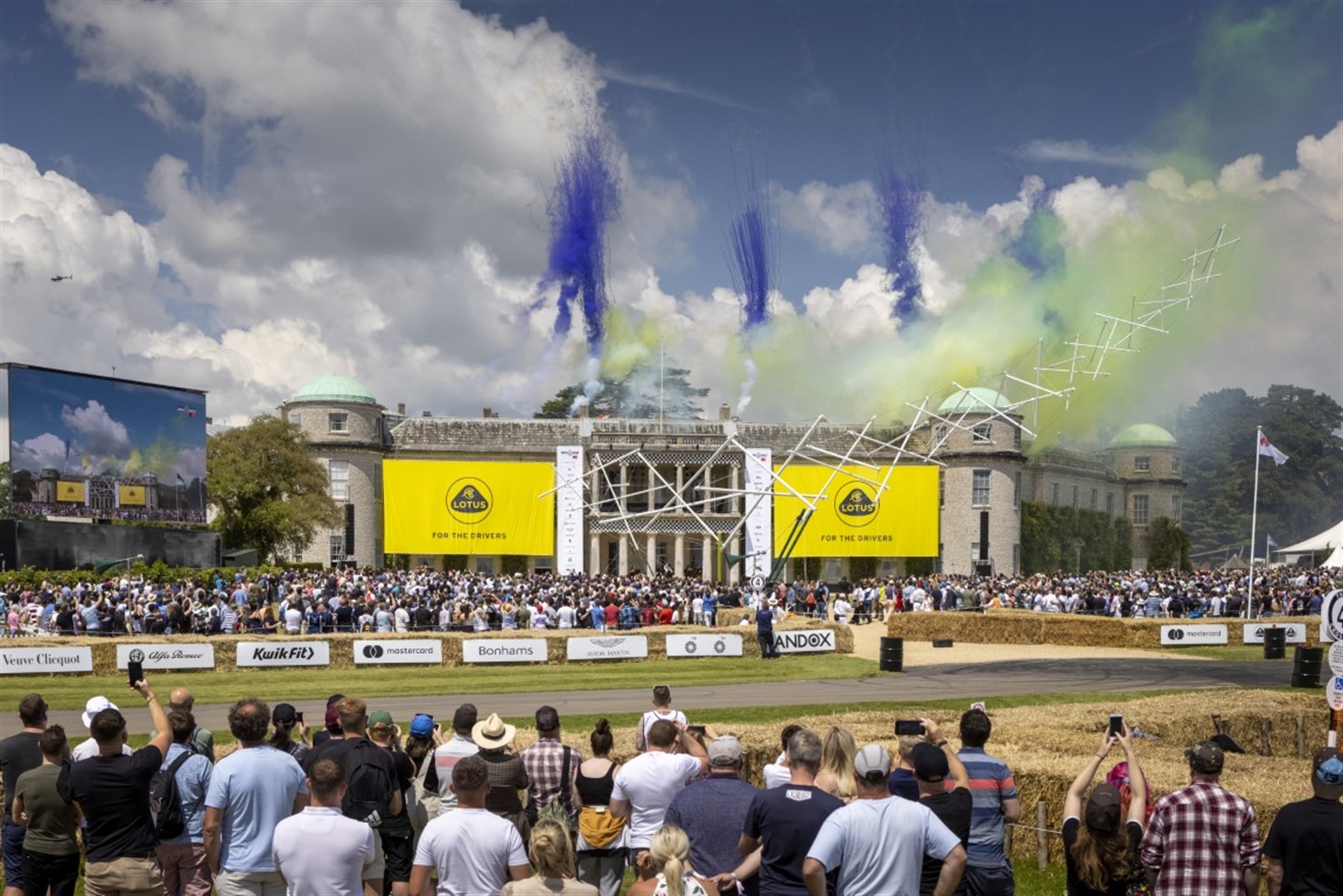 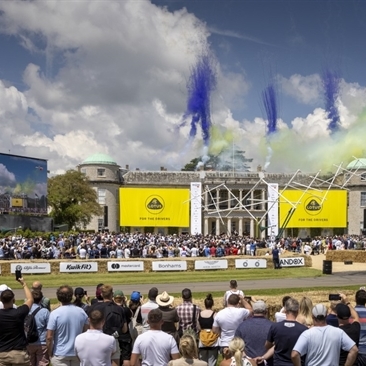 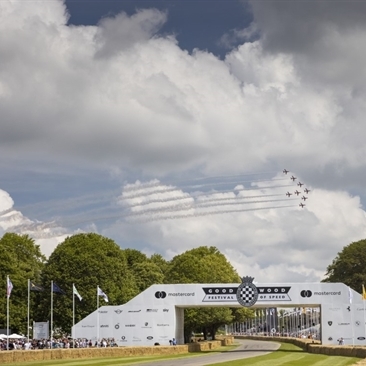 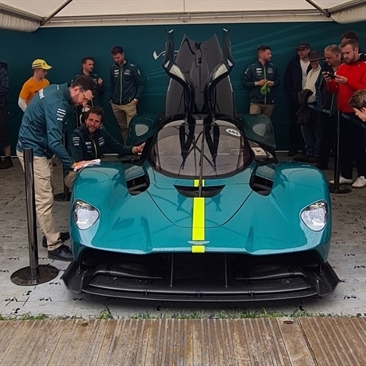 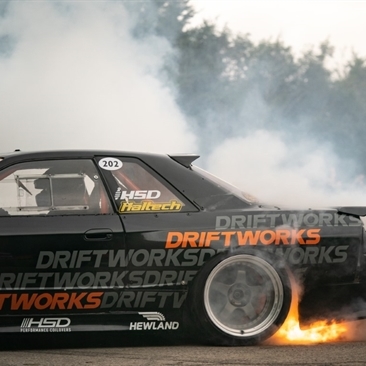 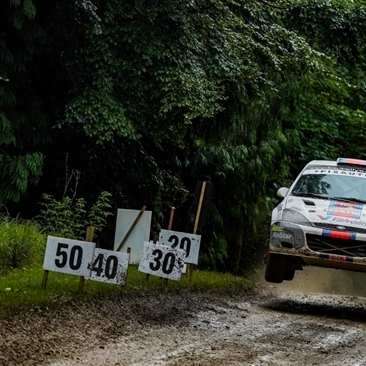 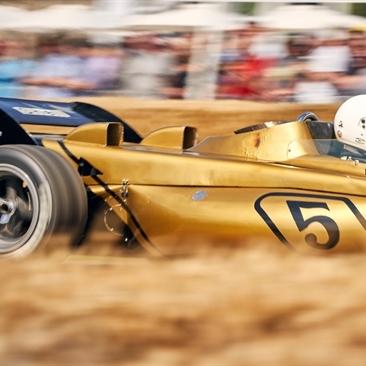 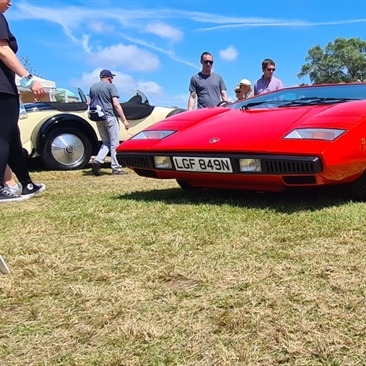 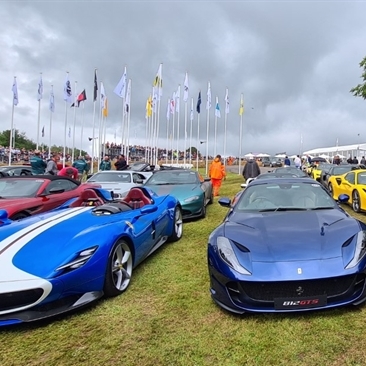 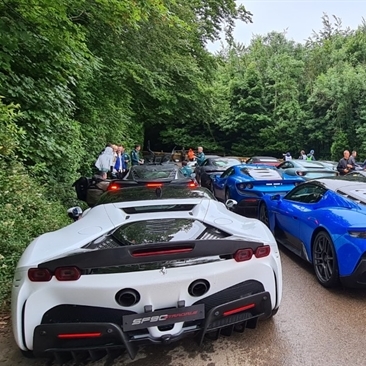 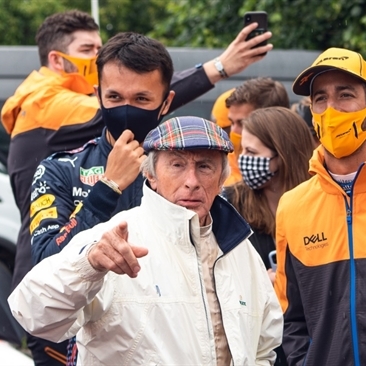 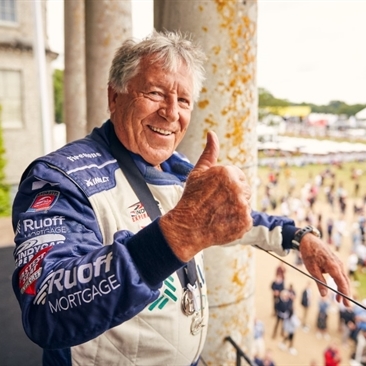 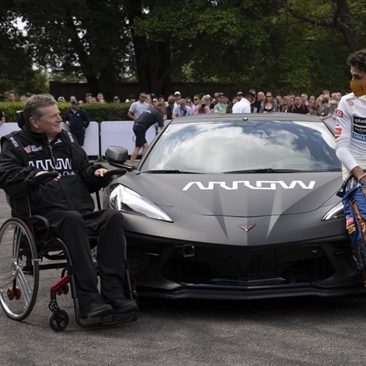